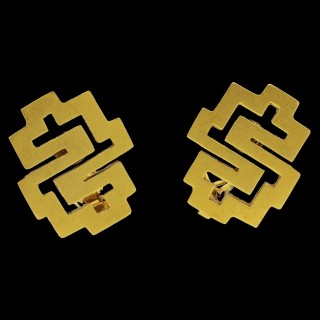 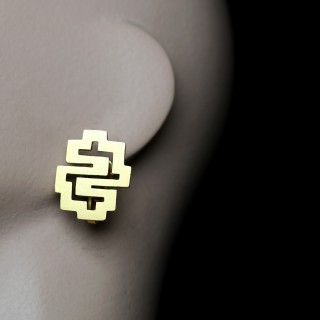 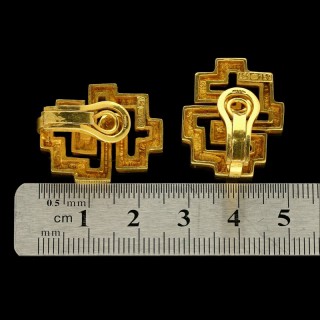 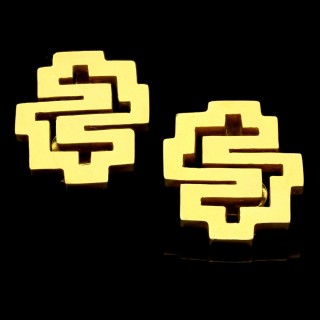 A pair of bold geometric clip earrings in 22ct gold from the Choreographism collection. 1977

A pair of bold geometric 22ct yellow gold earrings from the ‘Choreographism’ collection by Ilias Lalaounis 1977, each formed of a flat panel of geometric openwork motif in the form of a labyrinth with finely brushed, softly matte finish and clip fittings.

During the 1970s, Ilias Lalaounis created a trilogy of collections all of which were inspired by motion. The first was ‘Motion in Space’ presented in 1974, the second ‘Drops and Chitons’ was launched the following year and in 1977 he presented ‘Choreographism’. This final part of the trilogy was conceived as a tribute to movement in dance and to accompany the collection he created a video presentation in collaboration with the respected dancer and choreographer Dora Tsatsou-Symeonidou.
Like many artists, Lalaounis was interested in the dual aspects of movement created by dance. Firstly, the motion made by the human body and the different forms, shapes and positions it assumes during a dance. And secondly, the patterns that dancers trace both in the air and on the ground with every step, leap and turn they make. In ‘Choreographism’ Lalaounis sought to express these movements both figuratively and also literally in pieces such as the Pas-de-deux bracelet which features two dancers, one rendered in gold the other in onyx.
The origins of dance lie in ancient ritual and religious ceremony. Lalaounis believed that it also connected deeply to artistic traditions and in particular to the motifs that are seen time and again in multiple ancient art forms. Patterns such as spirals and labyrinths could, he felt, be seen as dance movements, frozen and rendered in two dimensions. “Beyond the weightless, graceful but fleeting movement of the dancer, I saw solid shapes which could be turned into jewellery or objets d’art.”
The labyrinth motif on which this suite of jewels is based has a long and rich, cross-cultural history during which it has been associated with myth, ritual and dance. It is found on cave walls, on pottery, on coins and seals, on floors and in churches and has inspired artists, architects, choreographers and writers. It appears to have fascinated Lalaounis as it can be seen not only in this collection but echoes of it also appear elsewhere along with other dance inspired designs that meander and spiral through his work.
With Choreographism, Lalaounis wanted to translate “the noble simplicity of man’s movement” into a static jewel that could “overcome the limitations of its form and acquire the force of a symbol.” These jewels are united by the powerful labyrinth symbol that repeats across them and vibrates with talismanic fervour. A movement, a dance, a pattern – frozen in time, rendered in gold and transformed into something beautiful and wearable that reminds us of the transient nature of motion.

The geometric motif of these earrings is featured on the front cover of the book ‘Metamorphosis’ by Ilias Lalaounis and the matching necklace in photographed in full on p. 316. The matching bracelet and necklace to these earrings are shown photographed on p.72 of ‘Ilias Lalaounis : Modern Revival of Ancient Gold’ by Chadour-Sampson and Lalaounis-Tsoukopoulou and p.68-72 describes the inspiration behind the Choreographism collection which was conceived as a tribute to movement in dance.

A pair of bold geometric clip earrings in 22ct gold from the Choreographism collection. 1977