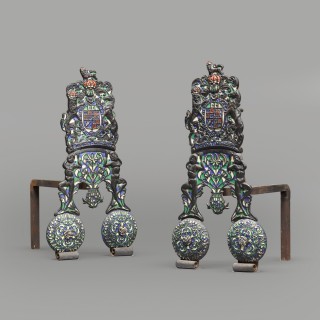 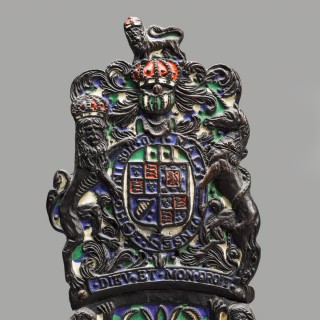 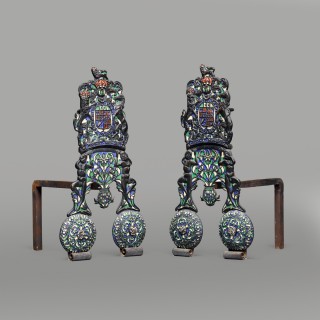 A Pair of Charles II Style, Enamel Brass and Cast-Iron Armorial Firedogs, In the Manner of Anthony Hatch and Stephen Pilcherd.

Each firedog is decorated with red, blue and white enamel, the upperpart bearing the arms of Charles II or James II, the middle part formed of two nude male figures supporting the arms with a vase of flowers between them, the lower portions in the form of two convex disks decorated with flowers, with wrought iron supports.

They are modelled after an example in the collections of the Victoria & Albert Museum, London, formerly belonging to the Earl of Cowley (inv. no. 416&A-1905). For a long time, their method of production -whereby the fields to be enamelled were cast in the original moulds and not, as was more common, engraved (champlévé) or enclosed (cloisonné)- was referred to as Surrey Enamels after the author Charles R. Beard ascribed their manufacture to a factory in Esher, Surrey. However, documentary evidence makes a strong case for their reattribution to the London workshops of Anthony Hatch and Stephen Pilcherd, members of the Armourers’ and Braziers’ Company (see C. Blair and A. Petterson, ‘Details for Surrey Enamels Reattributed (Part 1)’, Journal of the Antique Metalware Society, June 2006, No. 14).