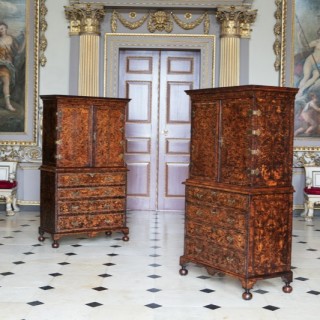 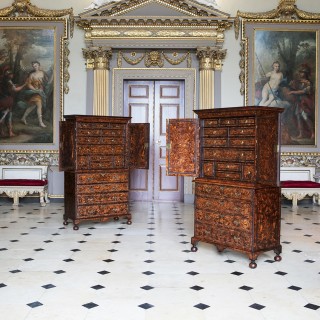 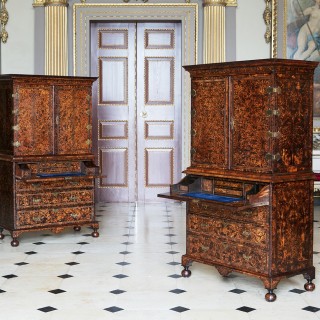 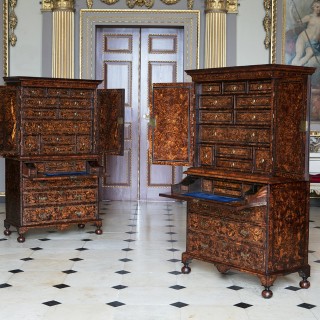 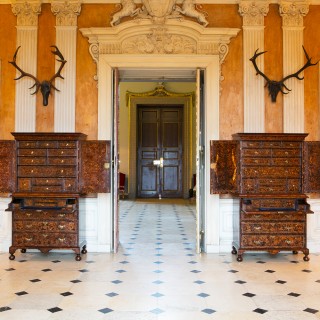 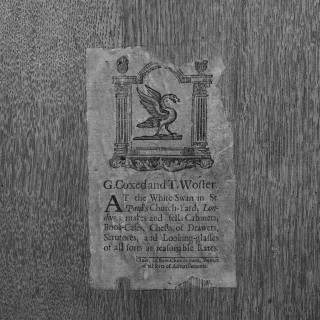 A Pair of Coxed and Woster Mulberry Cabinets on Secretaire Chests

A Pair of Coxed and Woster Mulberry Cabinets on Secretaire Chests
EXCEPTIONAL ENGLISH FURNITURE – A unique and important pair of Coxed and Woster ‘mulberry’ cabinets on secretaire chests, both bearing their original trade labels, circa 1719.
Coxed and Woster are known for their dramatic use of veneers. Burrs such as elm, walnut and of course the most highly prised ‘mulberry’ which is, in fact, burr maple. Mulberry, is a generic term coined in the 1950s by the antique trade to describe burr maple (Acer Campestre) taken from the root ball. The highly figured veneer in its raw state is white in colour and with little contrast to the grain. It is not until the veneer is treated with nitric acid, (or as it was described in “Treatise of japanning” published in 1688, “aqua forties) turning it to a pleasing oxidised orange hue. The grain is then highlighted with the use of lampblack which gives a striking contrast, giving the effect of tortoiseshell in appearance.
The cabinets were made in a time of great prosperity with 18th-century entrepreneurs extending the range of their businesses around the globe. By the 1720’s, Britain was one of the most prosperous countries in the world, and English novelist Daniel Defoe boasted: “We are the most diligent nation in the world”. The vast trade, rich manufactures, mighty wealth and insurgents of tens of thousands highly skilled Protestants fleeing oppression after 1685, led to the rise of what is now known as the ‘golden age’ of furniture. For example, the use of white metal stringing and kingwood cross-banding that embellish these cabinets is almost certainly down to Gerrit Jensen, who introduced much of the continental habits in the late 17th century.
Signed/Inscribed
G.Coxed & T.Woster At the White Swan in St. Pauls Church-yard, London; makes and sells cabinets, book-cases, chest of drawers, scrutores, and looking-glasses of all sorts at reasonable rates.

No.11: Estate of the late Mr Wallace, Oregon USA.

Leading furniture historian and celebrated author ‘Dr Adam Bowett’ kindly provided the following information.
“This secretaire-chest and cabinet bear the trade label of Grace Coxed and Thomas Woster, who managed the White Swan workshop in St Paul’s Churchyard between 1719 and 1735. Nine labelled pieces from their partnership have been recorded, and this piece brings that number to ten. The use of stained burr maple veneers in conjunction with rosewood crossbanding and white metal stringing, although not exclusive to the White Swan workshop, occurs on about half its recorded output. Grace Coxed inherited the White Swan workshop from her late husband, the cabinet- maker John Coxed, who died in December 1718, and she also continued his practice of labelling furniture. John Coxed’s will stipulated that Grace should go into partnership with his brother-in-law, Thomas Woster, and under their joint management the White Swan workshop thrived until Grace’s death in August 1735. During that time the firm used three different labels to mark their output, of which this is probably the earliest version, dating from c.1719-25. Two other pieces with this label are known: a walnut bureau-table in the collection at Colonial Williamsburg, Virginia, and a burr maple desk- and bookcase in a private collection. In the 1720’s the secretaire-chest and cabinet was still a relatively new design. Two walnut-veneered versions bearing John Coxed’s label are known and another walnut example bears one of the later versions of the Coxed and Woster label, but this is the first burr maple example to be recorded”.

A Pair of Coxed and Woster Mulberry Cabinets on Secretaire Chests