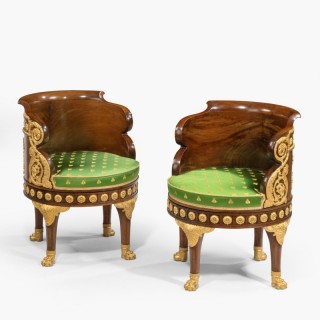 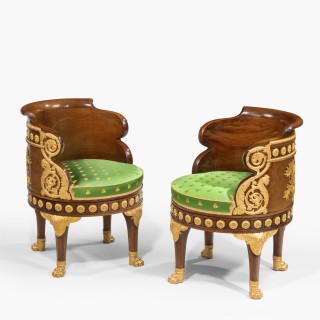 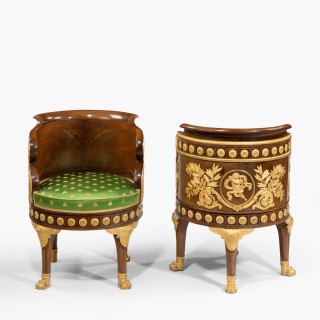 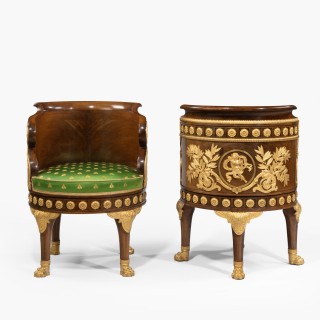 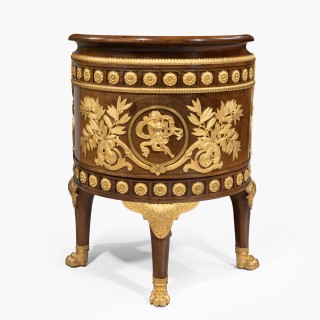 A Pair of Fauteuils de Bureau of the Napoleon III Period

Constructed from the finest book-matched Cuban mahogany, rising from tapering legs dressed with gilt bronze hairy paw feet; the circular revolving seats above a frieze of inset paterae and featuring out-swept backs decorated with ormolu laurel leaves and central allegorical roundels featuring a youth presenting a beehive and another playing the lyre.
French, circa 1860

The archetypal fauteuil de bureau, of nearly identical form and dimensions-yet differing in its ormolu decorations-is in the permanent collection of the Metropolitan Museum of Art (Accession no. 07.225.53; gift of J. Pierpont Morgan). Completed circa 1805-08, the chair carries the brand marks C M J surmounted by a princely or ducal crown, indicating the collectors’ marks of Caroline and Joachim Murat, the brother-in-law of Napoleon and later King of Naples.

Napoleon used a similar chair at the Palais de Tuileries in Paris, today housed in the Chateau de Malmaison. Like its predecessors, the maker of this chair is unrecorded, however their formal features suggest the influence of Percier & Fontaine, who were the preeminent bronziers of the Directoire and Empire period. The presence of the youths holding a beehive and a lyre are allusions to the Napoleonic Empire and Classical Antiquity, respectively. As such, the chairs symbolise the union of these two traditions coming together, a theme often found in the designs of Percier & Fontaine.

A Pair of Fauteuils de Bureau of the Napoleon III Period