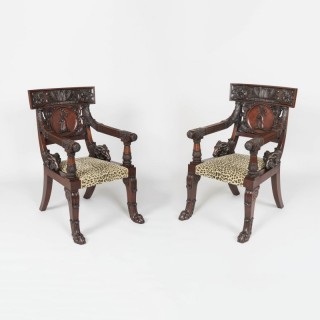 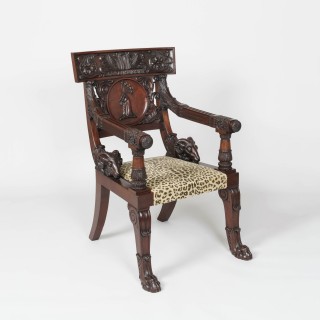 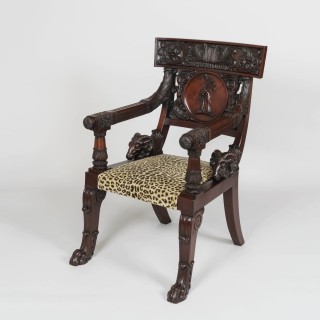 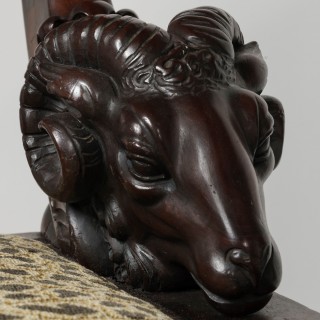 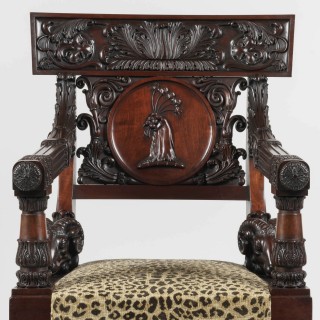 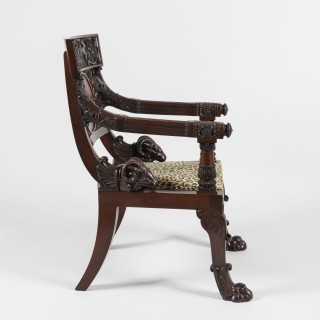 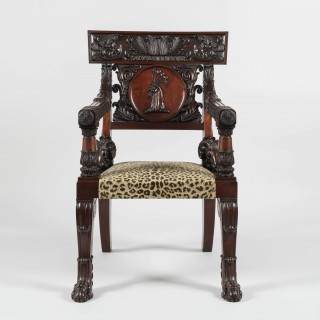 A Pair of Klismos Armchairs of Important Size

Constructed in a finely patinated Cuban mahogany, dressed with the carved Burnell family crest; rising from claw footed swept and lapetted legs, with sabre legs to the rear; the front arm supports of tapering columnar form, carved with stylised acanthus leaves; the arms reeded, conjoining the back rails which issue from magnificent carved ram’s heads, capped by rounded form scroll and acanthus carved toprails.
Circa 1835

The present chairs are identical to an armchair in the Metropolitan Museum of Art, New York (67.63.1) and its identical companion in the Victoria and Albert Museum, London (w.3-1967) . As suggested by Penelope Hunter at the Metropolitan, the armchairs most likely all belonged to a larger set. Some chairs include the signature of “C. Dixwell,” referring to Charles Dixwell. Dixwell was a London “upholder” who was apprenticed to the celebrated furniture maker George Seddon for seven years, and who is recorded to have subscribed to Sheraton’s Drawing Book in 1793. His profession included the tasks of upholsterer, furniture repairman, and undertaker. It is likely Dixwell was involved in commissioning, upholstering, and selling the armchairs in the early 19th century.

The Metropolitan Museum credits Thomas Hope as the designer and maker of these striking armchairs. By the second quarter of the 19th century, Hope had cemented his reputation as a designer and interior decorator, and he was dubbed by his contemporaries as the “furniture man” among London’s aristocratic circles. These inventive chairs are a testament to the confidence and ingenuity characteristic of Hope’s mature designs.

A Pair of Klismos Armchairs of Important Size