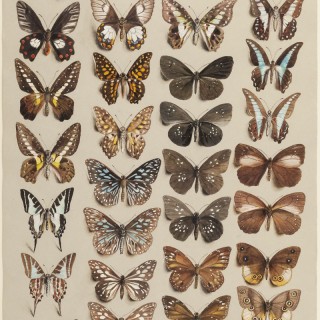 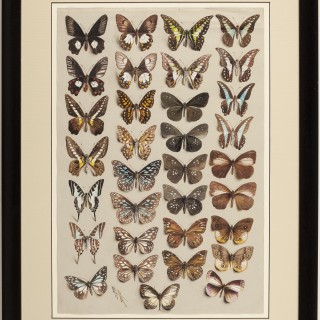 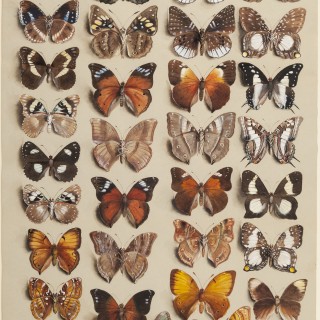 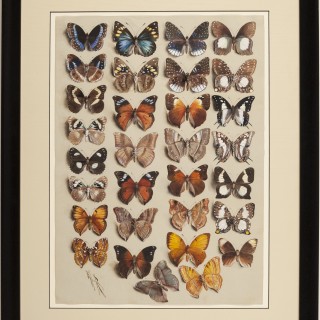 A Pair of Watercolours with Bodycolour

Biography:
Marian Ellis Rowan was an Australian artist and naturalist and well known illustrator whose highly regarded work spanned birds, butterflies, moths, insects, flowers and trees both in her native Australasia and also in North America.
Between 1879 and 1893 Ellis Rowan exhibited her work in international exhibitions in Australia, India, England, Europe and the US and was awarded 10 gold medals, 15 silver and 4 bronze. During a two year stay in London just before the turn of the century she achieved a great deal of fame and Queen Victoria added three of her paintings to the Royal Collections. She also wrote Flower Hunting in Queensland and New Zealand (1898) which was an account of her adventures. Rowan then moved to the U.S. where she worked closely on three publications with American botanist and author, Alice Lounsberry.
Returning to Australia around 1905 she continued her search to find and record every species of wildflower on the continent; The South Australian government purchased 100 of her paintings; Queensland purchased 125.

In 1916 and again in 1918 she visited Papua New Guinea where she found and illustrated many unclassified flowers, butterflies and also 47 of the 52 birds of paradise. In order to follow her passion it was necessary to travel in unmapped territory with local guides and under extremely primitive conditions.

Permanent Collections:
Queen Victoria acquired 3 of her paintings for The Royal Collections.
In 1920 Ellis Rowan held an exhibition of 1000 paintings in Sydney, (the largest collection ever exhibited in Australia) and the following year the Government agreed to purchase the collection for the nation. The Rowan collection is held at the National Library of Australia, Canberra.
The Library also hold a portrait of her by Sir John Longstaff R.A.

Ex-collection of Blanche (Bli) Ryan, the artist’s sister and thence by descent to Merlin Montagu Douglas Scott (great-grandson of the 5th Duke of Buccleuch)
Sold Christies London 16 May 1995. Watercolours and Pictures of Birds and Ellis Rowan’s Butterflies and Moths of New Guinea. Sold in Aid of the Merlin Trust