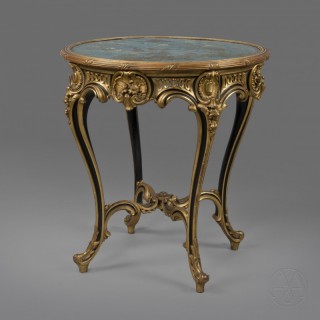 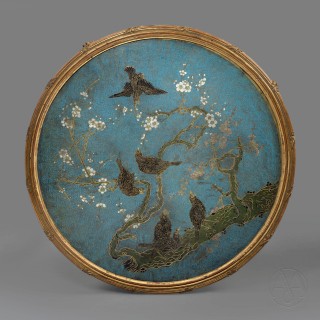 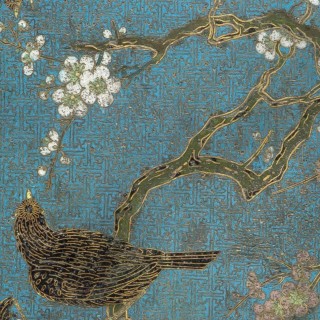 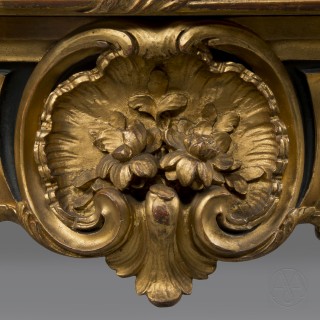 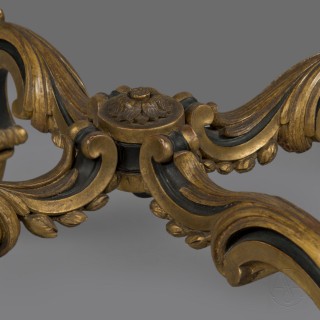 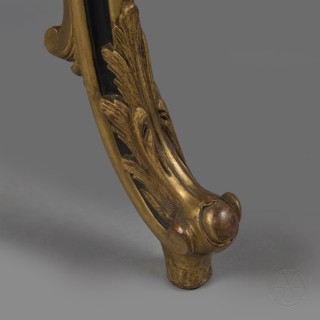 A Parcel Gilt and Cloisonné Enamel Gueridon In The Manner Of Christofle & Cie.

This fine gueridon has a circular top inset with a striking Japanese turquoise ground cloisonné panel of birds in flight and perched on the branch of a prunus tree, with a characteristic interlocking wan-emblem background. The pierced apron is finely carved with ‘C’-scroll cartouches and raised on four ebonised and parcel gilt cabriole legs headed by foliate sprays. The legs are united by a ‘C’-scroll stretcher and terminate in acanthus carved feet.

This gueridon epitomises one of the most fashionable styles during the Nineteenth century: ‘Japonisme’. East Asia had a major influence on Western culture and its decorative vocabulary during the extraordinary flourishing of creative imagination witnessed during the second half of the Nineteenth Century. The importance of East Asian symbolism was paramount for these new pieces: every decorative element had its own important symbol that recalled its Eastern roots.

The prunus mume flower, or plum blossom, visible on this fine gueridon, were well-loved symbols of the arrival of spring in East Asia, notably in both China and Japan where their early emergence during the cold weather came to symbolise perseverance and hope, as well as beauty and purity. The blackbirds, most likely swallows, are also auspicious symbols of spring, bringing with them good luck to the household. The number of birds is also pertinent, with six being a lucky number in China that brings good fortune.

The resurgence of interest in China and Japan was directly related to the economic and political interests of the West, evidenced by the Opium Wars in China, which were wholly concerned with trading rights and agreements. The second Opium War was concluded by the British and French occupation of Beijing in 1860. The British army reserved part of its share of spoils looted from the Imperial palace for Queen Victoria. The French booty was sent to the Emperor Napoleon III and Empress Eugenie. By February 1861, the French spoils were on display to the public at the Tuileries in Paris. It was no ordinary exhibition: it was one of the first times that Westerners had been exposed to the magnificent objects made for the Chinese Emperors. It was perhaps during this interlude that the Empress Eugenie evolved the idea of displaying the collection permanently in a ‘Chinese Museum’, which was eventually inaugurated in 1863 at Fontainebleau. Rooms were remodelled to complement the exhibits, with furnishings in the Chinese taste supplied by French makers. The involvement of the Empress and the court in the project encouraged others to take an interest, and the result was an enthusiasm for all things Chinese.

In 1854, issues of trade and naval convenience prompted the Americans to force Japan to open its borders, which had been closed to foreigners since 1615. During its period of isolation, Japan had witnessed the rise of an affluent, refined, luxury-loving society with high regard for the arts. From 1854, and particularly following the restoration of Emperor Meiji in 1868, quantities of high quality Japanese works of art found their way into the West. Widespread interest in all things Asian was further stimulated by Japanese displays at the International Exhibitions of 1862, 1867 and 1876. In 1869, an exhibition was held by the Union des Arts Decoratifs in Paris, where an entire museum of Oriental art was displayed. The Japanese too were quick to respond to the increasing fashion for furnishings a la Japonaise and were too soon producing goods made in a Japanese style but adapted to have maximum appeal to Western tastes.

In the West, contact with quality Asian works of art had a direct impact on attitudes about design and decoration. Designers and makers studied the forms and techniques and began to produce goods using the stylized vocabulary and balanced asymmetry of the Far East. The Western hunger for this taste is evident in a range of products, and is exemplified by this piece.