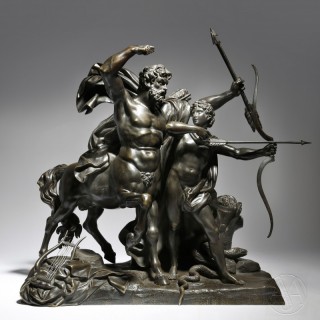 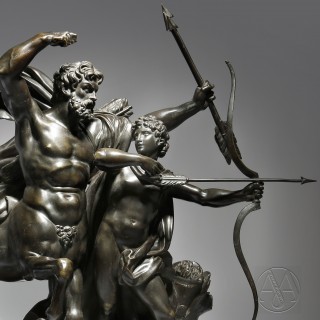 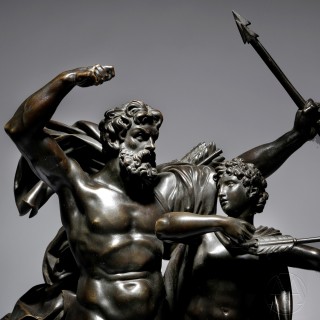 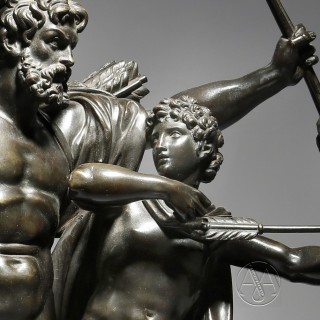 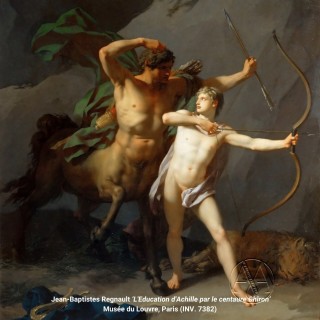 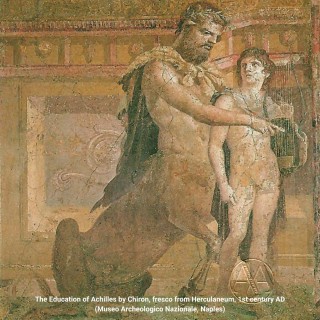 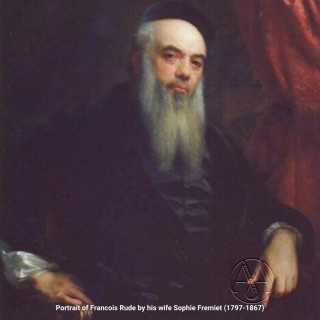 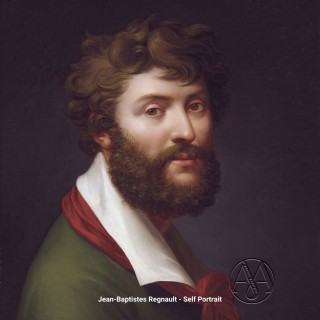 A Fine Nineteenth Century Patinated Bronze Group Of The Education of Achilles By The Centaur Chiron, Cast After The Model By François Rude.

Finely cast and retaining its original rich patination this fine sculptural group depicts the Centaur Chiron holding an arrow with a lyre at his feet and instructing the young Achilles in archery, a serpent lies coiled at the feet of Achilles and the group is raised on a naturalistically cast base.

The composition is inspired in part by a by a famous ancient fresco discovered in Pompeii, now displayed at the Museo Archeologico Nazionale, Naples, and more directly by the monumental canvas by Jean-Baptiste Regnault of the same name.

Preserved today in the Musée du Louvre, Paris (INV. 7382). Jean-Baptistes Regnault’s famous work ‘L’Education d’Achille par le centaure Chiron’, which was exhibited at the salon of 1784, and was his morceau de réception at the Academy in the same year.

Abandoned by his mother Thetis, who returned to live with the sea nymphs, the young Achilles is sent by Peleus to be educated by Chiron a wise and cultured centaur. Received by Chiron as a disciple he is instructed in the heroic skills of manhood. In this composition Chiron teaches Achilles the fine art of archery. The subject has often been understood to symbolise the changes which took place following the turbulent years of the Revolution.

François Rude (1784-1855), was a highly regarded French romantic sculptor. He entered the Ecole des Beaux Arts in Paris at the age of sixteen, where he studied under François Devosage. He also studied under Fremiet and Denon and worked in Gaulle’s studio on a bas-relief for the Vendome Column.

In 1810, Rude was a runner up in the ‘premier grand Prix de Rome’ which he then won in 1812 with his ‘Artistee pleurant ses abeilles’. He established himself in Paris in 1827 at the rue Denfer. He became Chevalier of the Legion d’Honneur in 1833 for his statue of a Neapolitan Fisher Boy playing with a Tortoise, which is now in the Louvre.

Rude exhibited continually from 1810, winning the gold medal of honour at the Exposition of 1855.

He had many state commissions for statuary and bas-reliefs and sculpted monuments to his illustrious contemporaries. He executed numerous bronzes of Napoleonic marshalls and is best known for the colossal group ‘Le Depart’ on the Arc de Triomphe de l’Etoile, symbolising ‘The Marseillaise’.

Rude’s greatest masterpiece was a romantic sculpture, ‘Le Depart des volontaires’ which he worked on between 1835-1836. This piece shocked many critics by its powerfulness and the boldness of its conception.

The museum ‘des beaux-arts’ and the Rude museum in Dijon both have good collections of his important original work.

Jean-Baptiste Regnault (1754-1829) was a French painter born in Paris, who began life at sea in a merchant vessel. His talent attracted attention at a young age and he was sent to Rome by M. de Monval, where he studied under the history painter Jean Bardin before returning to Paris in 1772 where he transferred to the studio of Nicolas-Bernard Lépicié.

In 1776 he won the Prix de Rome for his painting ‘Alexandre and Diogènes’ (Paris, Ecole National Supérieur), and in 1783 he was elected Academician. His diploma picture, the ‘Education of Achilles by Chiron’, is now in the Louvre. Returning once again to Rome he studied at the Académie de France in the company of Jacques-Louis David and Jean-François-Pierre Peyron.