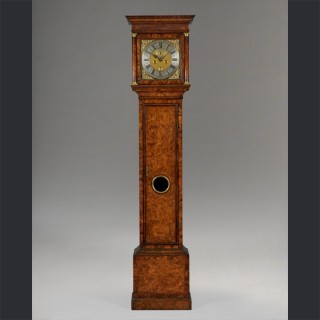 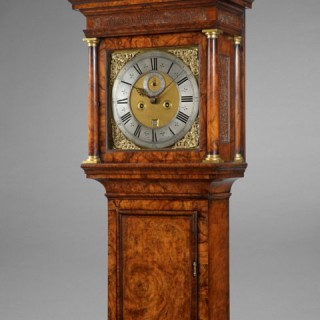 A Queen Anne longcase clock veneered with well figured walnut. Standing on a single plinth, there is a brass lenticle to the moulded door. The flat top hood with sound fret and turned columns with brass capitals flanking the hinged door.

The twelve inch square dial is mounted with a silvered chapter ring, seconds ring and corner spandrels with cherubs supporting a crown. The centre is finely matted with ringed winding holes and an aperture to view the day of the month. The clock is numbered 250 beneath the chapter ring, which is signed Josh Wilson, London.

The eight day duration movement has five substantial pillars, anchor escapement and inside count wheel striking with the hours sounded on a bell.

Joshua Wilson was apprenticed in 1688 to William Fuller. He became a member of the Clockmakers’ Company and was one of the small number of makers of the early period, along with Tompion and Quare, who numbered their clocks. Examples of his work are included in the Science Museum and the Wetherfield Collection.