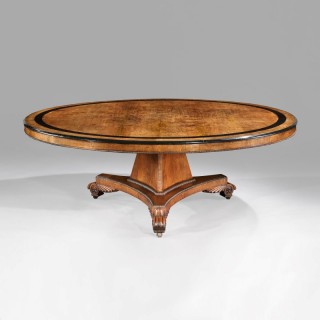 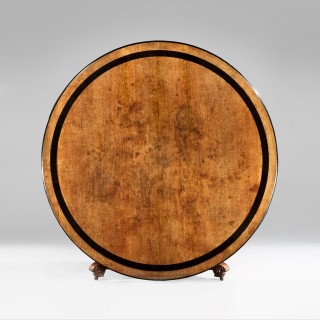 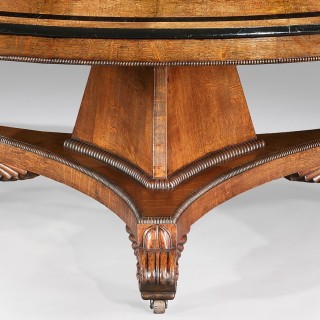 Constructed in a finely figured oak, with ebony banding, to the platform; the castor shod tripartite base terminating in scrolled and winged toes, the truncated pyramidical column having a tilt-top arrangement for the circular thumbnail edge inlaid platform.
Circa 1830

The Trotter Family were associated with the Edinburgh Merchant Company since 1691, and the esteemed William Trotter (1772-1833) established himself in his sole right, after various partnerships, in 1805 in Princes Street. He was the most important, and successful Cabinet Maker in Scotland, and his extensive premises were described in Thomas Dibdin’s ‘Tour in the North Countries of England and Scotland’, quoting, in part ‘The locality of this great …warehouse is rather singular. It is on the ground floor, lighted by a skylight. Of great length, and vistas filled with Mahogany and Rosewood objects of temptation. Of all styles, including the modern form’. The use of restrained and understated decoration, including the reeding, paterae and re-entrant moulding utilising designs after the Antique is seen on many of Trotter’s documented works.