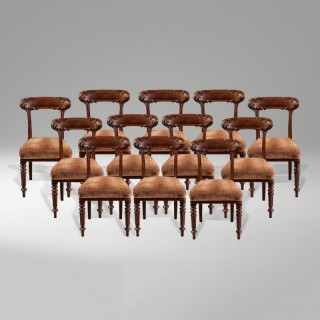 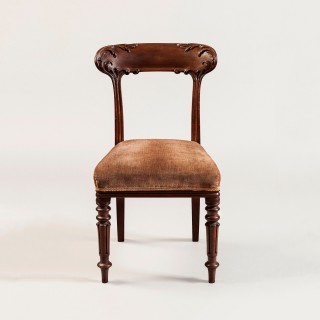 Constructed in a well figured Cuban Mahogany; rising from ring turned, lapetted and lobed front legs; the upholstered seats framed within an ogee framework, with the swept and reeded uprights blending into a shaped tablet toprail, crisply and deeply carved with foliates. Marked to the underside by the makers.
Circa 1835

Howard and Sons were established in 1820 by John Howard, at 24 Orange Street, London. In 1854 the firm had expanded considerably and was established in the heart of the furniture district of London at 22 – 36 Berners Street. They employed their eclectic range of styles working for many important clients at important houses such as Sudbury Hall in Derbyshire and Elton Hall, Huntingdonshire. Still fashionable at the end of the 19th Century they provided the fittings for Mr Vanderbilt’s Yacht. Their work is in the Royal Collection, and the Queen’s private collections at Sandringham and Balmoral, and a cabinet made in 1862 is in the collection of the Victoria and Albert Museum. The company ceased to trade in 1947.