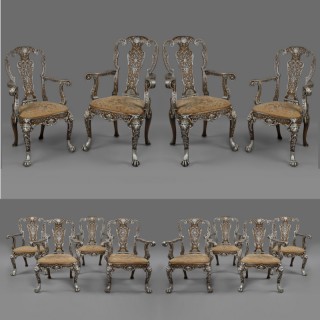 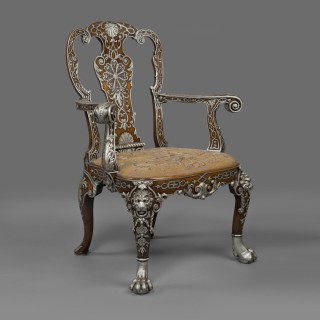 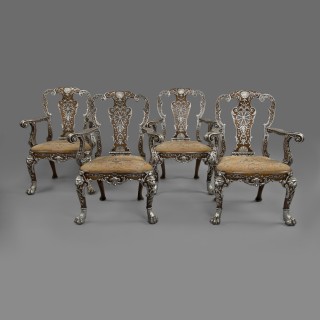 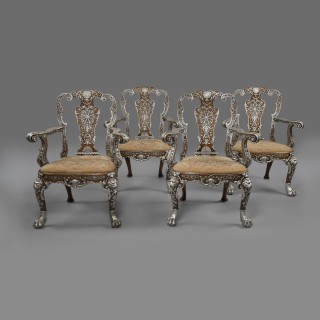 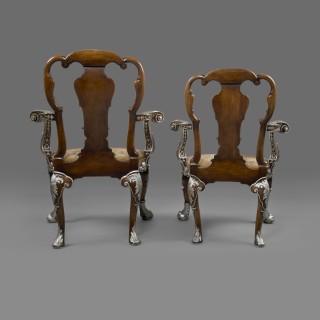 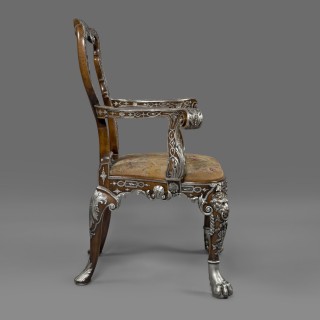 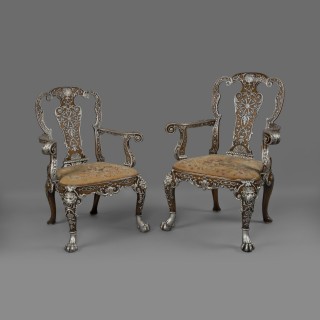 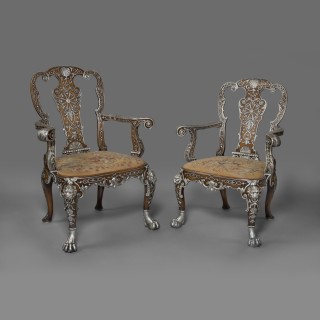 Each chair has a shaped cresting rail above scrolled uprights and a vase shaped splat, the outward curving arms terminating in scroll ends above a drop in gros and petit-point needlework seat, above scrolling cabriole legs headed by lions masks and put down on ball and paw feet to the front and pad feet to the rear. Each chair is enriched all over with shells, fretbands and strapwork highlighted in silver.

The design for this important set of chairs is faithfully taken from a remarkable set of mid-eighteenth century giltwood and gesso seat-furniture in The Royal Collection. The set consists of 30 side chairs, now in the Queen’s Audience Chamber at Windsor Castle, a further pair of settees in the Royal Collection [RCIN 33392], and a single settee in the Metropolitan Museum of Art, New York [24.136.1]. The chairs traditionally thought to have been made for Stowe House, Buckinghamshire, were originally attributed to James Moore (d.1726), but are now thought more likely to be by his assistant Benjamin Goodison (1700-1767). The chairs were acquired for the Royal Collection by Queen Elizabeth The Queen Mother.

Lenygon & Morant were the leading cabinetmakers of the Edwardian age specialised in historic styles that evoked the Queen Anne, William & Mary and Georgian taste.

Francis Lenygon (1877-1943) was trained as a cabinetmaker and studied at the South Kensington Museum in London. By 1900, he found work with Art Workshops, Ltd., and soon after with Charles Duveen, son of Sir Joseph Duveen. Employed by C.J. Charles for several years, Lenygon became well-known as cabinetmaker to England’s aristocracy.

He opened his own firm, Lenygon & Co., in 1904, and in 1909 merged with Morant & Co., to become Lenygon & Morant, with premises at 31 Old Burlington Street.
Lenygon published his seminal book ‘Decoration and Furniture of English Mansions during the Seventeenth and Eighteenth Centuries’ in 1909 and featured a series of illustrations showing several pieces acquired by the firm in situ at their Burlington Street studio.

Lenygon made a name for himself by acquiring complete period rooms, including a Dutch Painted Room from Groningen, Holland and others, which were described as ‘the most interesting and important complete room[s] – both historically and artistically – which has ever been exhibited (Lenygon & Morant, Description of the Painted Room in the Collection of Messrs Lenygon & Co. Ltd, 1910).

In March 1939 they created three gilt-wood twelve-branch chandeliers based on one originally supplied to George II, at a cost of £92 each, for The Throne Room, Windsor Castle, presented to Her Majesty Queen Elizabeth by The Hon. Sir Richard Molyneux, KCVO. They remain in the Royal Collection in the Garter Throne Room at Windsor Castle.

Travelling to the United States as early as 1910, Lenygon gained several wealthy and sophisticated clients who relied on him to furnish authentic and replica interiors in period styles. The firm received numerous commissions from prominent American collectors, including Nelson Rockefeller, who hired Lenygon to consult on the reconstruction of Colonial Williamsburg and its Governor’s Palace.

Lenygon was widely known for his expertise in 17th- and 18th-century British furniture and interiors and lectured widely on the subjects. He served as president of the American Institute of Decorators and the Art and Antiques Dealers League of America. He was also a Fellow of the Royal Society of Arts and the North British Academy.

Lenygon died in New York City in 1943. He was survived by his second wife, Jeanette Becker Lennygon, whom he married in 1926. Jeannette was also a well-respected interior designer, best known for her redecoration of several rooms in the White House during John F. Kennedy’s presidency and for the interior redesign of Gracie Mansion for New York mayor John Lindsay. Jeannette died in Evanston, Illinois, in 1977.

The company was renowned for both their historical knowledge and the quality of their production.

The company acquired the cabinetmaking firm Howard & Sons (1820-1934) in 1934. In 1935 Howard and Sons traded from 31 Old Burlington St where they produced mainly upholstered furniture. They ceased trading in 1947 and then advertised as ‘Makers of Howard Chairs and Sofas’ by Lenygon and Morant when the company later moved to 48 South Audley St in 1954 just a stone’s throw away from our gallery at numbers 66-67.