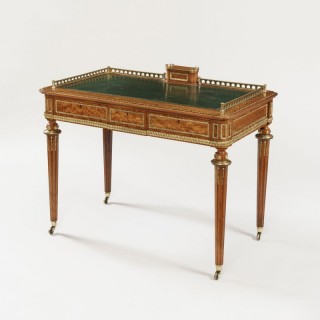 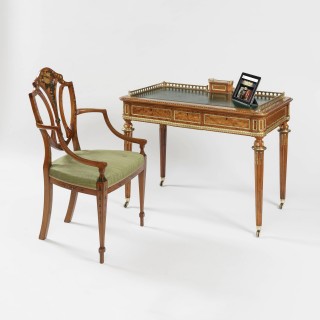 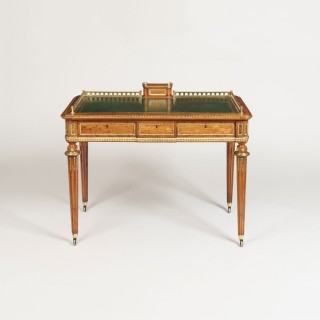 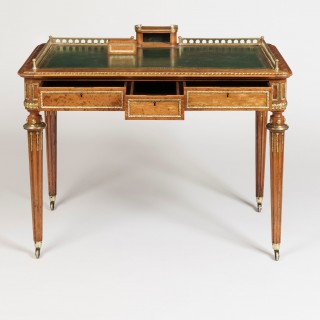 Constructed from finely figured satinwood dressed with ormolu mounts, rising from brass castors, the fluted legs having gilt bronze capitals and decoration, the desk having a fine original green leather writing surface surmounted by a rare perforated three-quarter gallery and an incorporated writing instrument compartment; below, the guilloche decorated apron with three lockable mahogany-lined drawers.
Circa 1865

The design for this desk is closely linked to the furniture supplied by Holland & Sons to Queen Victoria at Osborne House. The house was the Queen’s favourite residence, and Holland & Sons went on to supply furniture to numerous other royal residences including Windsor Castle, Balmoral and Marlborough House.

Originally founded in 1803 by Stephen Taprell and William Holland, a relation of the architect Henry Holland, the firm of Holland & Sons soon became one of the largest and most successful furniture making companies in the 19th Century.  The firm worked extensively for the Royal Family, being granted the Royal Warrant early in the reign of Queen Victoria, hence taking a leading part in the decoration and furnishing of Osborne House, Sandringham, Balmoral, Windsor Castle and the apartments of the Prince and Princess of Wales at Marlborough House.  Holland and Sons also worked extensively for the British Government, for whom they executed over three hundred separate commissions, including the Palace of Westminster, the Victoria and Albert Museum, and oversaw the State funeral of the Duke of Wellington.  Among their private commissions the firm produced a celebrated suite of bedroom furniture for the late Sir Harold Wernher at Luton Hoo.