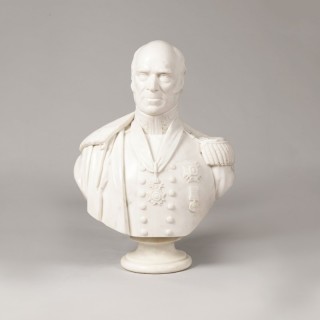 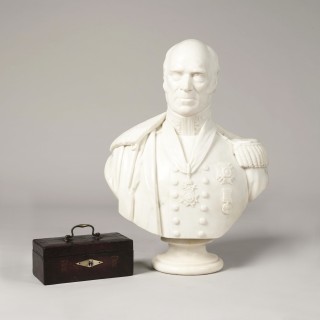 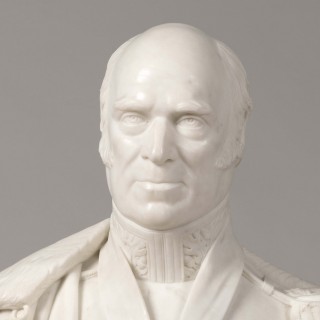 A Sculpted Carrara Marble Bust of Lt General Sir Lewis Grant KCB KCH (1778-1852)
By Robert Physick (1815-1865)
Lewis Grant was the son of Duncan Grant of Mulochaird, Strathspey, and the younger brother of Sir James Robert Grant, the chief British Army medical officer at Waterloo. Entering the army as an ensign in the 95th Regiment, and subsequently promoted; he was aboard the HMS Orion at the Battle of Groix in 1795 off the Brittany coast during the French Revolutionary Wars, and fought against the French in both Trinidad and Tobago, under Sir Ralph Abercromby, later the Governor of both, prior to Lewis Grant. Holding various army positions in Tobago and Dominica in the early years of the 19th century, and appointed Governor of the Bahamas in 1820, then Governor of Trinidad in 1829, serving during the Abolition of Slavery Act of 1833 with distinction. Appointed a Knight Commander, and Knight Bachelor.

We have his red morocco leather document casket, by J Ponell, Messengers Trunk Maker, no 340 Oxford St, London, of rectangular form with a brass handle, which bears the Royal Cypher thrice, and containing various pieces of documentation on the family Grant, including their tartan, and details of Castle Grant. The portrait bust is signed by the artist, and dated 1852.

Robert Physick (1815-1865) was a member of the West Country family who distinguished themselves in the fields of sculpture and portraiture. A Silver Medallist at the Royal Academy, he exhibited his work between 1837-1856.