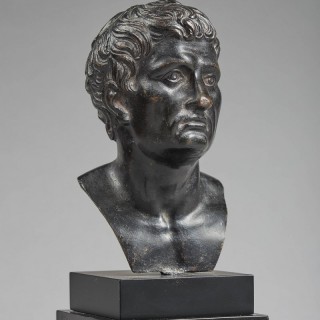 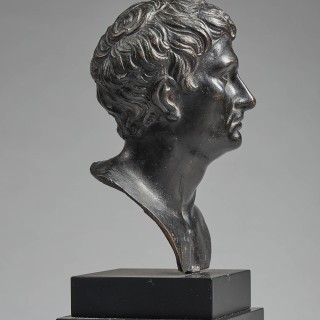 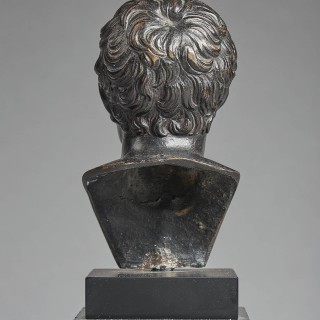 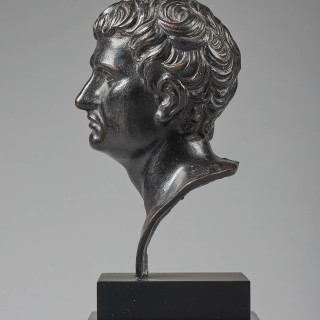 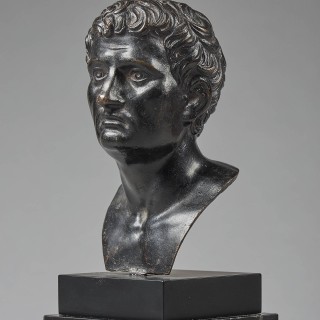 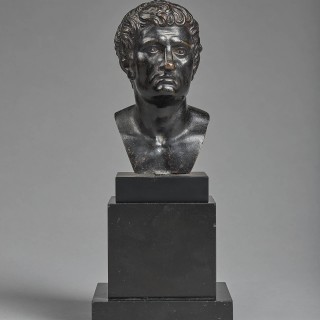 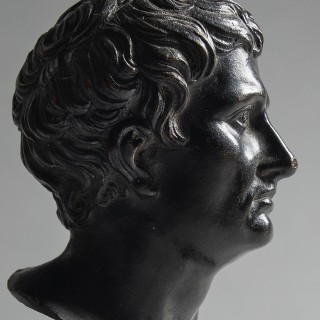 A Small Bronze Bust of a Man All'Antica

This small but vital bronze portrait depicts a clean-shaven man with short locks of curly hair, the head turned to sinister and the bare chest and shoulders truncated in a square shape just below the neck. It is likely that this work was inspired by an antique Graeco-Roman portrait bust, which was possibly a portrait of a young emperor or member of the Roman ruling élite.

It is likely that the present bust originates from the north of Italy and dates to the sixteenth century, at a time when sculptors were producing small all’antica bronzes for the private studies (studioli) of antiquarian collectors in Humanist centres such as Venice, Padua and Mantua. During the late fifteenth and sixteenth century, the portrait bust became an increasingly popular genre, following the advice of Renaissance scholars such as Poggio Bracciolini (1380-1459), who revived the ancient notion of the exempla, an image of an outstanding individual: ‘Even the most learned among the ancients spent time and energy in the acquisition of sculptures and paintings… For they believed that images of men who had excelled in the pursuit of glory and wisdom, if placed before the eyes, would help ennoble and stir up the soul’.

Of the various bronze specialists producing small-scale bronze portraits during this period, the present bust relates most pertinently to the corpus of bronze busts attributed to Simone Bianco, a Tuscan sculptor who was active in Venice from the second decade of the sixteenth century and whose love of the ancient world is demonstrated by his signing of his marble works in Greek letters: ‘ΣIMΩN ΛEYKOΣ ‘O ‘ENETOΣ’. The Venetian scholar Pietro Aretino praised Simone Bianco’s works in marble, sent to King François I of France, in a letter of 1538 addressed to the sculptor, while Vasari in his Lives of 1550 also mentioned the sculptor, highlighting his renown amongst his contemporaries.

Several small bronze busts, only recently attributed to Simone Bianco by Peter Meller (op. cit.), may relate to the present work in terms of their size, surface patination and subject. See, for example, the small bust of an unknown man, one version in Modena attributed to Simone (Museo Estense, see Meller, p. 206, no. 15) and another unattributed version in New York (Metropolitan Museum, acc. no. 27.14.14) dated to the early sixteenth century, in which a young male is depicted bare chested all’antica with the shoulders truncated in a shape similar to the present bust, the eyes also incised with circular irises and round pupils and a similarly dark, black surface patina. Another bust of a Roman male in marble, carved by Simone Bianco for the Château de Compiègne in France (see Meller, p. 202, no. 6) is executed with a comparable pattern of voluminous, bouffant curls ending at the fringe.

The present portrait is also comparable in spirit to several small busts of antique males from the Mantuan circle of Pier-Jacopo Alari Bonacolsi (c.1455-1528), called ‘Antico’, such as the small portrait of Ptolemy of Mauretania from the Guggenheim collection (sold at Christie’s, New York, 27th Jan 2015, lot 24) which was previously attributed to Simone Bianco. The modelling in our bust of the hair at the back of the head, which emanates from the crown in a starfish pattern, can also be compared to a large bronze bust by Antico of the Greek dramatist Menander in Baltimore (Walters Art Gallery, 27.419). The modelling of the hair and general finish of the present bronze, meanwhile, may be influenced by works from the Paduan workshop of Andrea Briosco, called Riccio (1470-1532), such as his bust of a man (Vulcan?) in Washington (NGA, acc. no. 1957.14.56) and bust of a Youth or Saint John (NGA, acc. no1957.14.55), both of which exhibit similarly unfussy modelling and, in places, rough finish to the bronze with slight casting flaws apparent in the hair, as in the Saint John.

These similarities suggest that the present bronze was executed by a North Italian sculptor or workshop in the mid to late sixteenth century, who was influenced by Simone Bianco’s all’antica portraiture and also affected by Riccio’s more expressive style of bronze modelling.

A Small Bronze Bust of a Man All'Antica