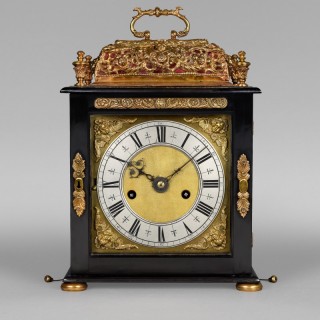 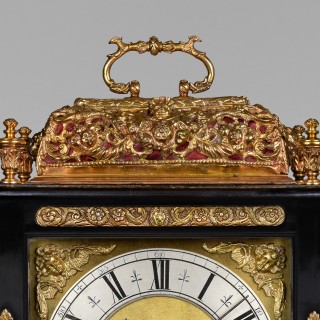 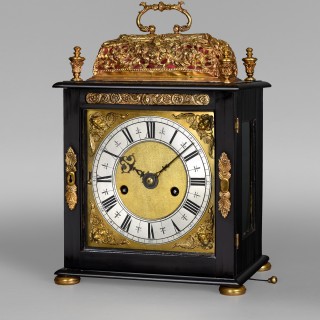 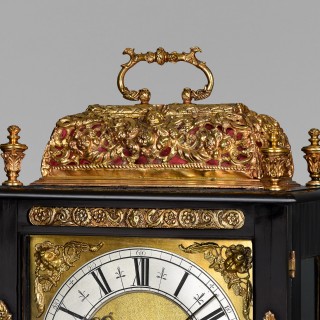 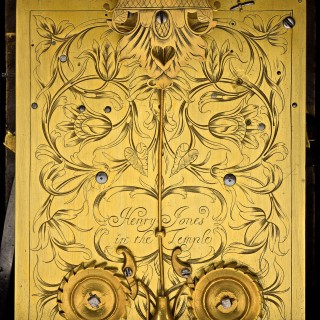 A small yet imposing Charles II quarter repeating spring table clock by one of the celebrated early English clockmakers.

The ebony veneered case stands on turned brass bun feet then rises to matching floral and foliage escutcheons to either side of the front door. The top rail of the door includes an elaborate cast and engraved sound fret around the face of Apollo. Above are four bold flambeau urn finials decorated with acanthus leaves, flanking the well-cast basket top which supports an elaborate bird and dolphin foliate tied carrying handle.

The 7 inch (18cm) square brass dial is mounted with winged cherub spandrels around a silvered chapter ring. The centre of the dial is finely matted with pierced and faceted steel pointers. Adjacent to 9 o’clock is a lever giving a strike/silent option.

The eight-day duration, two train fusée latched movement includes a verge escapement and pull quarter repeat mechanism with the quarters sounded on a single bell and the hours on a larger bell. The repeat mechanism can be operated from either side of the case. The back plate is engraved with scrolling leaves and flowers around the signature Henry Jones in the Temple with exposed click work beneath.

Henry Jones was one of the most eminent early makers. In 1654 he was apprenticed to Edward East and Free of the Clockmakers’ Company in 1663. He established his business in the Inner Temple and continued in the tradition of East making the finest clocks and watches contained in superbly crafted cases. In 1691 he was appointed Master and it is an interesting fact that one of the clocks he made for King Charles cost £150, a vast sum of money at the time. Jones died in 1695.

Examples of Jones’s work are included in the collections of The British Museum, The Guildhall Museum, and the Metropolitan Museum of Art in New York, USA, amongst many others.