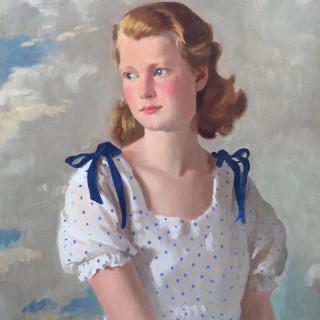 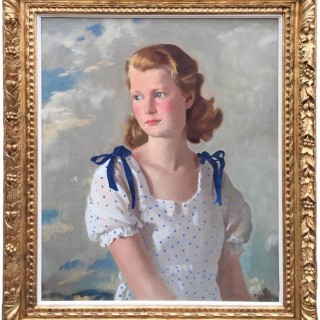 A Society Portrait Of A Young Girl Painted In The 1930s By Leading British Canadian Portraitist Archibald George Barnes R.P R.O.I R.I (1887 To 1972)

Original oil painting by Archibald George Barnes (1887 – 1972) Occasionally some paintings come along that are simply irresistible. This young society princess has the most striking blue eyes, the whole executed with that crisp clarity of application that characterised 1930s academic painting. It is an endless mystery to me that paintings of this quality and decorative potential, not to mention sentimental value, fall out of the ownership of their sitter’s descendants. This young lady needs a good home.

Archibald George Barnes RP ROI RI (1887 – 1972) Barnes was born in London, where he trained at the St John’s Wood School of Art and the Royal Academy Schools before the Great War. In a 1919 interview with ‘Colour’ Magazine, he declared that the paintings of John Singer Sargent and Charles Sims had proved more inspirational in his work than all his formal art education. He aimed to emulate his heroes’ concern for tone and taste, adding distinctive dashes of colour into his upbeat compositions. By instinct he was a “new romantic” and although he painted nature, he preferred to erase the uglier aspects of existence. The serenity of his work won many admirers in a traumatized post-war world and he was elected a member of the Royal Society of Portrait Painters in 1923, the Royal Institute of Painters in Watercolours in 1924 and the Royal Institute of Oil Painters in 1925. In 1930 he moved permanently to Toronto and remained there until his death in 1971. His works are held by the Royal Academy, the National Gallery of Canada and a number of British provincial museums.

Very good condition for its age

A Society Portrait Of A Young Girl Painted In The 1930s By Leading British Canadian Portraitist Archibald George Barnes R.P R.O.I R.I (1887 To 1972)