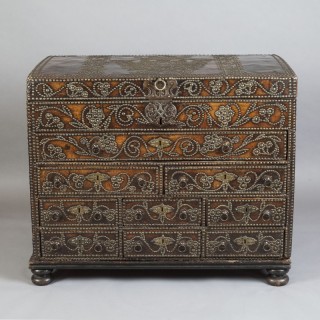 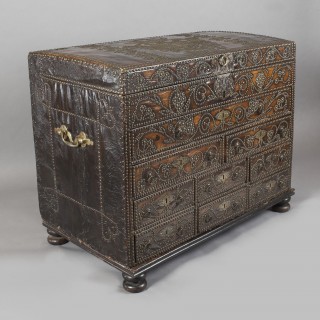 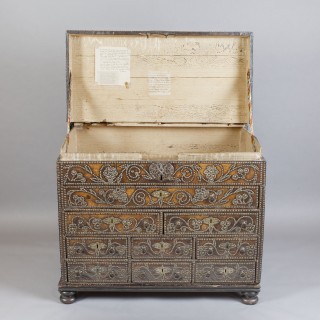 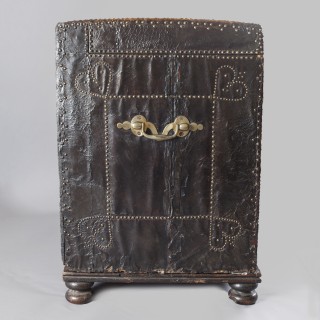 This very fine late 17th/early 18th century leather covered chest is densely decorated to the front with elaborate studding which forms leafy tendrils terminating in flowers. To the sides are heavy brass carrying handles framed by a studded rectangle with a heart at each corner and the slightly domed top is embellished with a coronet above the addorsed Cs within a cartouche of plumes. It is likely that the chest was made for the 1st Duke of Chandos (6 January 1673 to 9 August 1744) whose ciphers were paired Cs. The base upon which the trunk rests is a later purpose made addition. The Duke is now remembered for his patronage of the composer Handel and his involvement in setting up the Foundling Hospital in London,1739.

The leather, in this case horse hide, would serve to weatherproof the travelling chest which is lined throughout with paper simulating wood grain.

All such pieces of furniture were made to order from a coffer maker and although they were custom made according to the client’s needs, whether it be to carry books, medicine, clothes or even musical instruments, the multiple drawers here are notable in such an early chest; more common at the time was a large trunk (fitted for purpose) with just two drawers below whereas this has six small drawers at the base with two above and a further single drawer leaving only a relatively small space, most likely used for precious books.

Similar metalwork and nailing patterns is seen on chests of various configurations which were made by the Royal Coffer Maker William Johnson from 1707.

Regardless of who commissioned the piece of furniture and the exact date of its making, it is without doubt a very rare chest of fine quality in beautiful original condition.