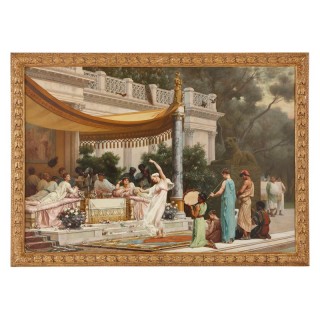 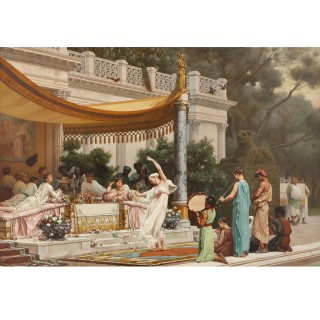 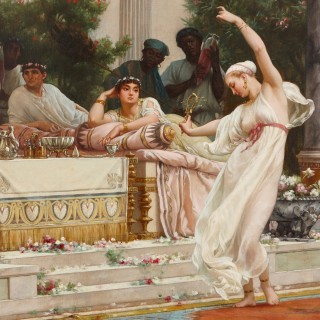 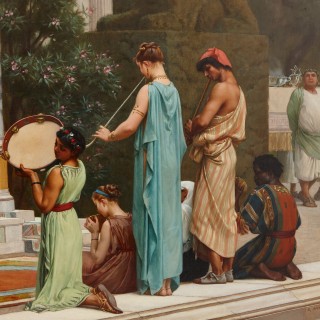 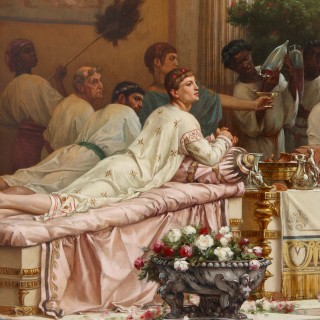 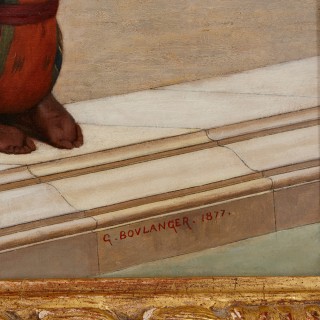 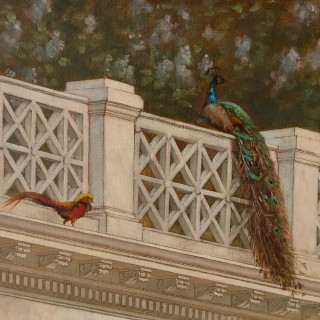 'A Summer Repast at the House of Lucullus', large oil painting by Boulanger

This beautiful painting was created in 1877 by the well-known French painter, Gustave Clarence Rodolphe Boulanger. Boulanger often produced work which combined the classical and Orientalist style, as is true of this piece. He was a key player in the French Orientalist movement, and was well-acquainted with its important practitioners, such as Jean-Léon Gérome.

Titled, ‘A Summer Repast at the House of Lucullus at Tusculum’, this painting depicts an ancient Roman feast. The centrally-positioned woman, who dances for a group of diners on the left, is the focus of the image. She is dressed in a sheer, white dress, which allows us to partly see her nude body. The woman performs to music, created by a band of musicians, positioned on the right of the canvas. On the left, a group of figures lie on their fronts before a table, which is full of silver dishes and platters. The man dressed in blue, seated at the end of the table — who is presumably Lucullus, the host of the feast — holds out his glass for more wine, which is poured for him by a young boy. Several figures stand nearby, holding wine vessels and fans. In the right-hand distance, the next course of the feast is carried on a table, ready to be brought out after the dance has ended. This scene takes place before a grand, white-stoned classical building, from which a gold-coloured fabric canopy extends, to provide shade for the diners.

Lucullus (118-56BC) was a politician in the late Roman Republic, who famously spent his retirement living a life of luxury. Indeed, the word ‘luxury’ derives from in his name. He is particularly well-known for his banquets, where he provided his guests with fine wine and elaborate meals. Lucullus contributed greatly to fine dining, and was responsible for introducing a species of sweet cherry and apricot to Rome.

The painting is signed, ‘G. Boulanger 1877’ in the lower-right corner. It has been placed within a classically-inspired, carved giltwood frame.

'A Summer Repast at the House of Lucullus', large oil painting by Boulanger