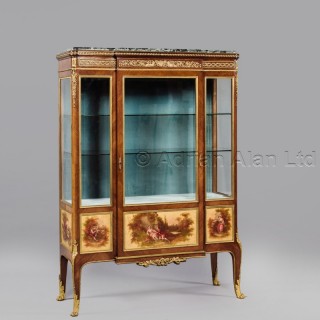 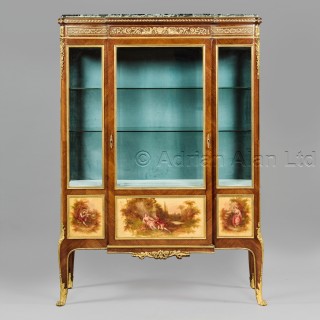 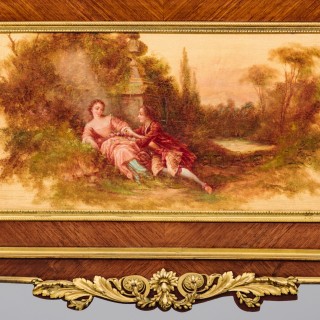 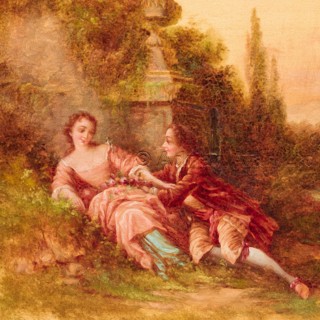 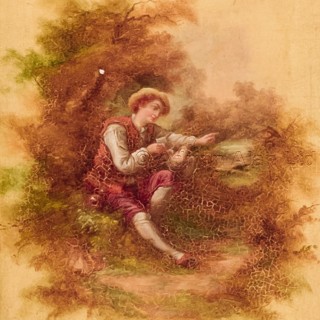 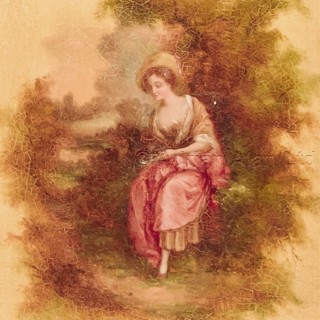 This elegant vitrine is of shallow break front form with an inset marble top above a foliate cast frieze centred by a mask of Ceres and flanked by opposing rams; the angles mounted with ribbon tied trophies. Below is a gilt-bronze framed bevelled glass panelled body, incorporating a central door above inset vernis Martin panels finely painted with pastoral scenes in the style of la fête champêtre . The central door opening to two glass shelves and a pale blue velvet lined interior. The apron centred by a fine acanthus mount and the whole raised on acanthus cast paw feet.

The technique of Vernis Martin was perfected by four brothers who produced what is considered to be the finest form of European japanning, lending their name to what later became a generic term. The elder brother, Guillaume (d. 1749) and Étienne-Simon (d. 1770) were granted a monopoly for producing imitations of Chinese and Japanese lacquer in 1730, which was renewed in 1744.

Vernis Martin was developed from a varnish called cipolin. It is remarkably lustrous and fine in texture and produces an array of colours ranging from greys, greens and blues and enhanced by gold dust beneath the surface producing a sparkling finish. This lengthy process requires the application of as many as forty layers to be applied to the surface, each of which is then polished to result in the required depth and finish.