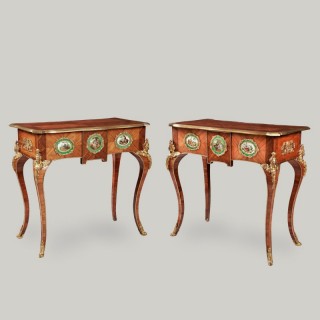 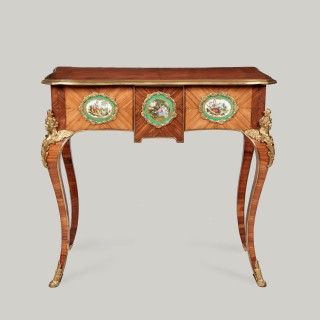 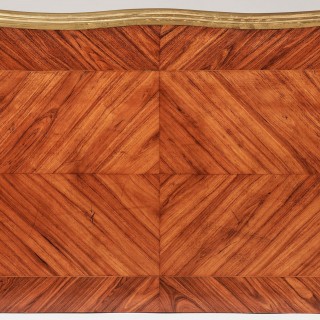 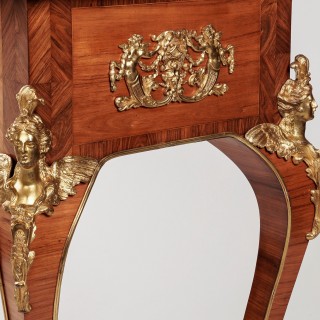 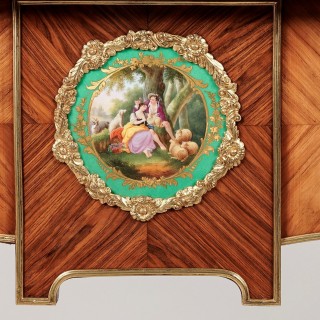 Constructed in kingwood and tulipwood, adorned with ‘Sèvres’ porcelain plaques decorated with pastoral scenes on a ‘fond vert’ palette, and dressed with fire gilded bronze mounts throughout. Each of rectangular form, the tables rising from sabot-shod cabriole legs terminating in winged female espagnolettes; the slight breakfont frieze bearing porcelain panels, while the tops quarter-veneered and crossbanded within a gilt metal border.
English, circa 1835

The fashion for displaying Sèvres porcelain plaques around the frieze of a table was probably started by the influential marchand-mercier Simon-Philippe Poirier who commissioned plaques directly from the Sèvres manufactory to be mounted on Martin Carlin’s furniture, the celebrated Louis XV-era ébéniste.

This French tradition was taken up by 19th century English firms such as Town & Emanuel who embraced the new Anglo-Gallic taste of their aristocratic clients, including Queen Adelaide, wife of King William IV, and the Duke of Sutherland. Town & Emanuel traded from their New Bond Street address throughout the 1830s, their trade label advertising ‘Tables inlaid with fine Sevre & Dresden China.’