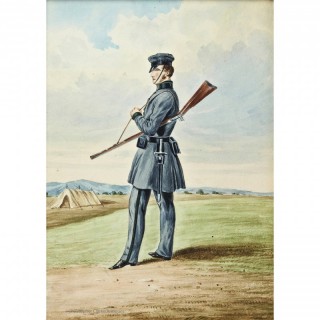 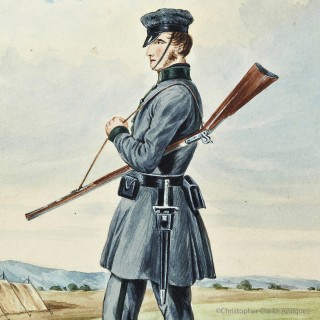 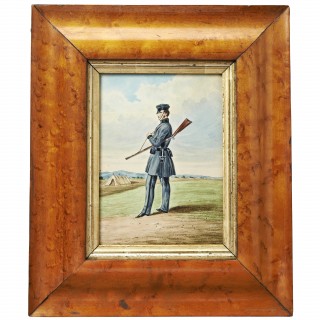 A Watercolour of a Volunteer Rifleman, probably from one of the Metropolitan Rifle Corps. The Volunteer is shown informally with his rifle slung over his shoulder and a tent in the background. It is possible that this study is taken from a contemporary print and such a subject would have been very popular when the Rifle Volunteers were first raised. It is well drawn and was done by a competent artist whether professional or amateur. In a maple cushion frame. Circa 1860.
Image Size is Given

The Rifle Volunteer Regiments
The Rifle Volunteer Regiments were formally sanctioned by the Government in May 1859 in response to the country’s fear that it was ill prepared to defend itself from possible French aggression. Previously Britain had a militia to serve as a means of bolstering the armed forces when needed. Although they started life as fairly autonomous organisations, they became more integrated with the army after the Childers reforms of 1881 and later formed part of the Territorial Force established in 1908. By 1862, the force numbered over 160,000 of which 134,000 were Rifle Volunteers with the rest made up of Light Horse, Mounted Rifles, Artillery and Engineers. Initially the force was paid for by public subscriptions and donations from honorary members, which suited a Government that could ill afford to pay for the volunteers. As the regiments started to run out of money, the Government paid a grant dependent on the number of volunteers, their attendance and that they had trained sufficiently. To not do so would have led to the volunteers having to pay for themselves and numbers dwindling. With time, the volunteers became better organised, received better instruction and training and worked closer with the regular army. There was a local pride and national celebration of the Rifle Volunteers which gave rise to the production of commemorative ceramics etc.