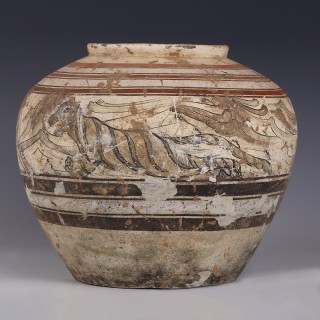 A brightly painted and finely modelled Chinese jar of the Western Han Dynasty. The jar features a flat base, a drum abdomen and a slightly everted rim. On one side, the jar appears decorated with an animated hunting scene, depicting a tiger chasing two deer. Further ornamental elaboration includes decorative bands painted in vibrant red and black pigments, and galloping zoomorphic creatures with only their stretched forepaws visible. The arched representations behind the galloping beasts are executed with brilliant brownish and buff pigments, which can be interpreted as parts of their abstractly rendered bodies, or as a representation of mountains. To the other side, curly, wide volutes that resmeble a coiled serpentine, echoing the early Chinese representation of a dragon.

Very fine condition, complete and intact, with partial sandy accretions and most of the paintings and pigments have survived.