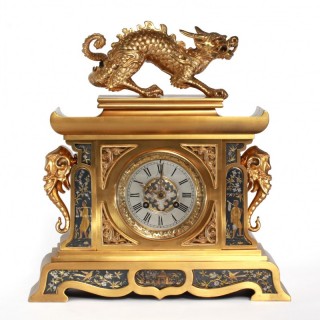 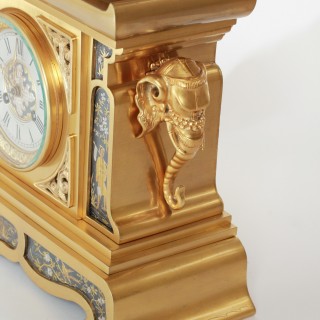 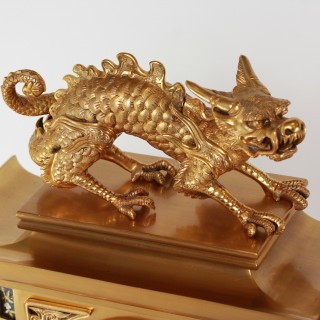 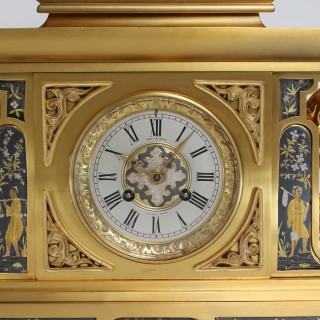 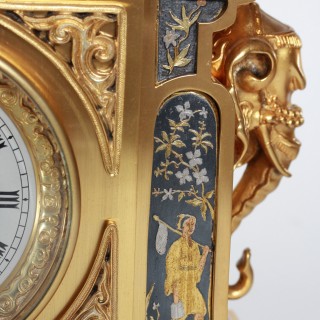 A fabulously stylistic clock of the highest quality, this French gilt bronze clock exhibits Far Eastern design influences from the Aesthetic movement of c. 1880. We have not seen anything else like this.

The gilded case is as original, the mercury gilding having a soft satin lustre. The clock is surmounted with a gilt two-horned Chinese dragon. The side handles are formed by elephant heads, in ornamental dress. The front of the case is stunning, each recess having a bronzed ground, decorated in raised gold and silver. Both sides of the dial show scenes depicting farm workers carrying baskets on a shoulder pole, beneath gilt trees bearing silver blossom. The base features birds among the blossom, the centre has a scene of a Chinese pagoda beside a lake.

The castings are meticulously detailed; the dragon in particular is quite magnificent.

The 4-inch dial ring is re-silvered and signed HOWELL & JAMES / TO THE QUEEN, LONDON. A deep oriental decorated bezel surrounds the dial, and the centre has a tri-metallic geometric design in bas relief.

The overhauled French striking 8-day clock movement is signed A ☆ B;  Achille Brocot (1817-1874) was the eldest son of Louis Gabriel Brocot, a renowned clockmaker who in 1840 had patents granted for an adjustable suspension mechanism.The movement strikes the hours and the passing of the half hour on a deep sonorous gong.

Howell James & Company was a firm of jewellers and silversmiths based in Regent Street in London which operated between 1819 and 1911. As a retailer of luxury goods, Howell & James came to denote quality goods and social pretensions, standing alongside Harrods of Knightsbridge. The firm championed the talents emerging from the South Kensington design school – Lewis Foreman Day had made a clock for the 1851 Great Exhibition and went on to design the company’s stand at the 1878 Paris Exhibition. His Aesthetic clocks were a mainstay of Howell and James’s production. They also exhibited at the London 1862 International Exhibition, and in Paris and the International Exposition of 1867.