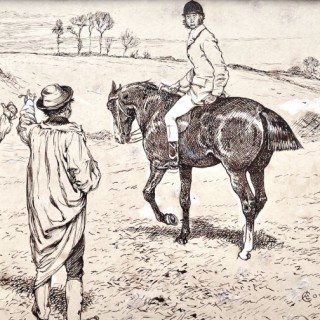 Alfred Chantrey Corbould was born in London, the grandson of the artist Edward Corbould; nephew of the artists Edward Henry Corbould and Charles Keene; and godson of Sir Francis Chantrey, RA. He initially studied under his uncle, the esteemed illustrator and war correspondent Charles Keene. A sporting artist, illustrator and caricaturist, he exhibited at the Royal Academy, Society of British Artists, Royal Institute of Painters in Watercolours, Royal Institute of Oil Painters, Birmingham Royal Society of Artists, Liverpool Royal Institute and elsewhere. In 1893 he was elected a member of the Royal Society of British Artists. He contributed top Punch, specializing in fox-hunting scenes and also contribute to the Graphic. In 1901 he produced The Corbould Sporting Alphabet, a book of hunting pictures.