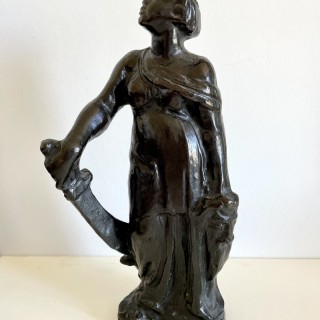 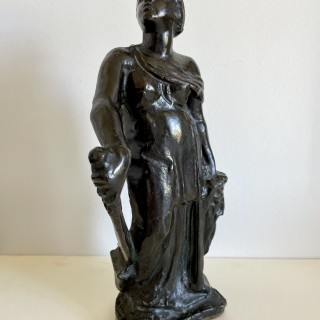 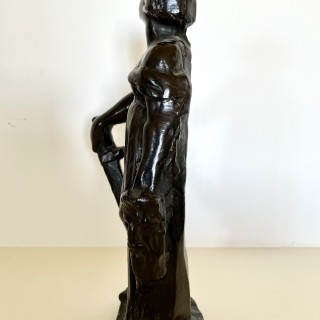 Alfred George Stevens was born at Blandford Forum, Dorset, the son of a decorator and joiner. At the age of ten he became an assistant to his father but in 1833 the rector of his parish enabled him to travel to Italy when he spent the following nine years studying throughout Italy. Returning to London, in 1843 he obtained a tutorial position in the School of Design at Somerset House, London. In 1850 he became chief artist to the Sheffield firm of H E Hoole & Co, who specialised in bronze and metal work. He returned to London in 1852 and received his first London commission: the vases and lions for the railings of the British Museum. In 1856 he won the competition for the Wellington monument, a massive commission that he did not live to see completed. Because of the enormous amount of time he spent on the Wellington monument he produced little other sculpture. For Dorchester House, Park Lane (demolished 1929) he designed a grand mantelpiece (now in the Victoria & Albert Museum) and he also designed four mosaics of the prophets Isaiah, Jeremiah, Ezekiel and Daniel for the spandrels under the dome of St Paul’s Cathedral. Stevens died suddenly in his studio in London at the age of 57.

Stevens is considered to be the father of a New Sculpture, a movement not really recognised until the end of the 19th century. He moved away from the then staid tradition of British sculpture and looked to the physicality of Renaissance Italy and modern industrial design. The figure of Judith was designed c.1862 and was intended to be completed as a large marble figure to be placed at the base of the dome in the proposed redecoration of St Paul’s Cathedral. It was to be one of a group of five figures of Judith, Jael, David, St Mark and St John. Unfortunately, the project failed to reach fruition. This figure is from a number cast from the plaster sketch models which are now in the collection of the Victoria & Albert Museum. The V&A also holds a bronze version of this figure.