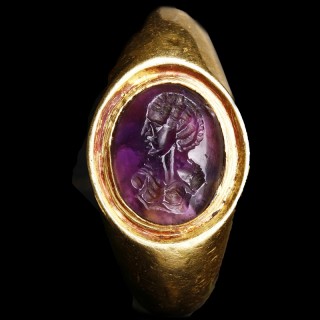 An extremely fine Ancient Roman hollow gold ring, featuring a D-shaped hoop, expanding shoulders and an oval bezel, set with an exquisitely engraved amethyst intaglio. The intaglio features the depiction of a female bust, shown in a well rendered profile, facing left. The figure is portrayed wearing a finely draped robe, exposing her neck and shoulders. Facial and anatomical features are rendered with much care and attention towards details. The figure’s hair is arranged in an elegant, curly hairstyle, resembling the one worn by Julia Domna, wife of emperor Septimius Severius.

This fine intaglio is carved from amethyst, an extremely important gemstone in ancient Greek and Roman culture. The word amethyst comes from the Greek word ἀμέθυστος (amethystos), meaning sober. In ancient Greek and Roman culture, the amethyst gemstone was associated with the god of wine, Dionysus or Baccus. The lady depicted on this fine intaglio, might be representing a woman from amongst the Roman elite. This idealised portrait follows the trends set by official portraiture of emperors and empresses depicted on imperial coinage. In this specific case, the hairstyle worn by the figure resembles the one worn by Julia Domna, wife of emperor Septimius Severius.

Condition: Extremely fine, signs of wear to the inside.