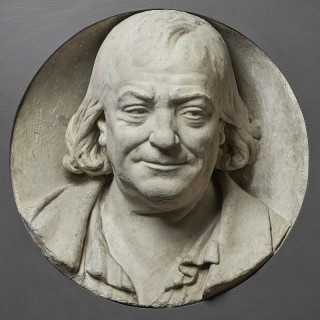 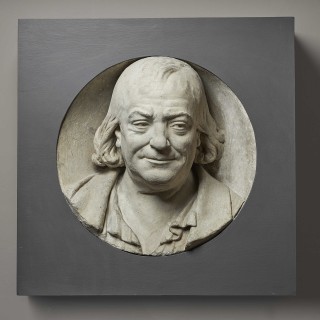 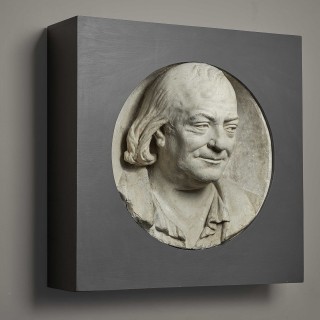 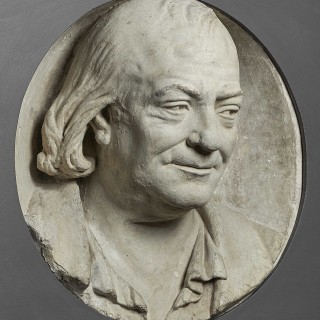 This charismatic portrait in high relief depicts a balding elderly gentleman wearing an open-collared shirt over a thin chemise, the head turned to sinister with a frown on his fleshy face. The form of the bust, in an oval tondo or medallion, and its medium (plaster) suggests that it was created for an architectural niche or placed high on a ceiling or frieze of a building, which indicates that the sitter was of a considerable standing in French society.

The influence of Houdon is evident in the unfussy rendering of the hair and dress, in contrast to the sensitively modelled facial features, which reveal the character of the sitter, who is clearly a man of humour and intelligence. He is portrayed with a mischievous, knowing frown, recalling Houdon’s marble bust of Voltaire (1778, Louvre, inv. no. R.F. 1426), which the present portrait may be referencing.

The balding forehead, long strands of hair falling at the sides and pursed lips are also reminiscent of Houdon’s bust of Benjamin Franklin, the prime version of which is the 1772 terracotta in the Louvre (inv. no. R.F. 349). This similarity to other busts by Houdon of Enlightenment figures, along with the informal dress (with the shirt and chemise worn en negligé), indicate that the sitter is likely to be an intellectual man of the arts, politics or sciences. The relaxed style of portraiture à la française – as opposed to the more austere classicism typical of nineteenth century portraits – would imply a dating to the last quarter of the eighteenth century, possibly just prior to the Revolution.

Jean-Antoine Houdon was the greatest French portrait sculptor of his generation. He was born at Versailles, where his abilities manifested themselves at a very young age and aroused the interest of the great sculptors of the age, such as Michel-Ange Slodtz, Lemoyne and Pigalle. At eighteen he went to study for four years in Italy after winning the Prix de Rome in 1761, and on his return he rapidly achieved great renown, travelling extensively to execute portraits for the leading Enlightenment figures of the day, including George Washington, Benjamin Franklin and Voltaire, which earnt him the nickname Sculpteur des Lumieres (“Sculptor of the leading lights”). In 1775 he became a member of the Académie. After the Revolution, Houdon continued working although in relative obscurity, occasionally being called on to execute commissions for Napoleon, and in his later years he taught at the École des Beaux-Arts, only retiring in 1823.

Please note, we offer free delivery of this item within London and the Home Counties. We can provide quotes for shipping elsewhere in the UK and overseas