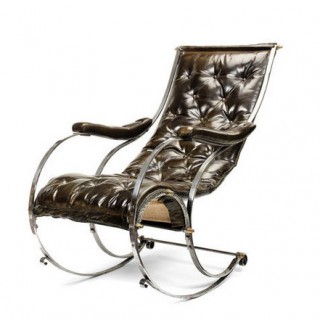 An early Victorian steel rocking chair after the famous model by R.W. Winfield of scrolled and downswept form, with button back leather upholstery.

Metal was originally used in the making of chairs in Paris by the company, Gandillot & Cie, from circa 1828 onwards. Both iron and steel furniture became progressively more popular over the course of the 19th century both across Europe and America. However, perhaps the most influential piece of metal furniture made during this period was a similar rocking chair to the present lot, manufactured by a Birmingham based enterprise called Winfield & Co., which was first displayed at the 1851 Great Exhibtion.  A comparable example to the offered chair features in Bentwood and Metal Furniture 1850 – 1946, ed. by D. Ostergard, 1987, no. 11, p. 210-211. And another similar version belongs to the Victoria and Albert Museum in London.