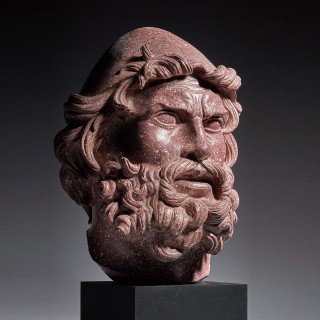 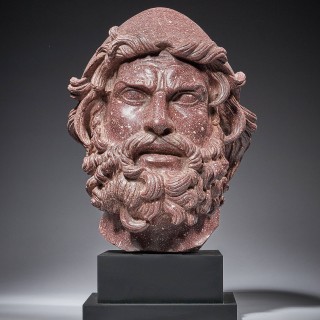 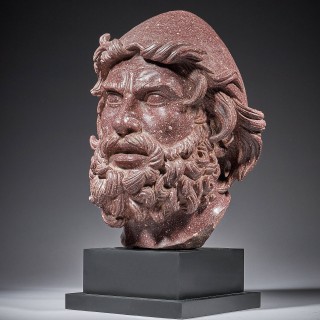 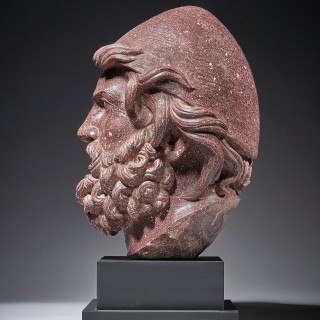 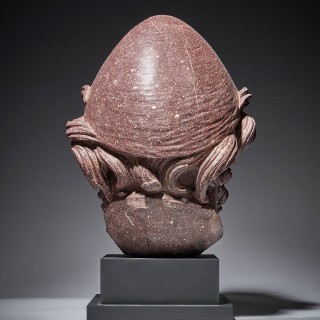 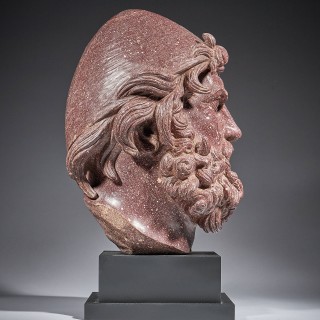 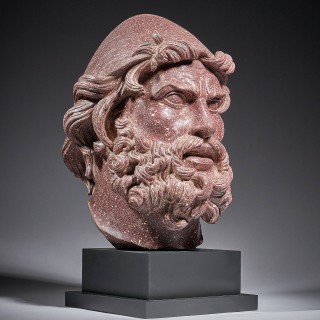 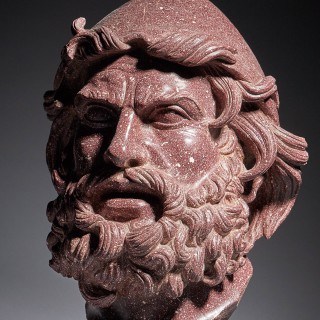 This exceptionally fine head of the Greek hero Odysseus (who the Romans called Ulysses), which conveys an intense and determined expression, appears to be a unique modern work in porphyry. It is very closely related and probably after the ancient marble head from the villa of the Emperor Tiberius at Sperlonga, which was only re-discovered in modern times.

The marble Ulysses, now displayed in the Museo Archeologico di Sperlonga, was part of a sculptural group displayed in a natural grotto at Tiberius’s seaside villa at Sperlonga, which showed the blinding of the drunken Cyclops, Polyphemos. As recounted in Homer’s Odyssey, the giant had trapped Odysseus and his companions in his cave and had feasted on half a dozen of the men, before Odysseus crafted a plan to get the Cyclops drunk, put out his single eye, and escape from the cave clinging to the bellies of the blinded giant’s sheep.

In a biography of Tiberius, we learn that in this very grotto the emperor was nearly killed by rocks that fell during a dinner party. Much later, the sculptural groups were broken up by earthquakes and by Christians, and the cave was abandoned. It was not until September 1957 that the sculptural groups inside the cave were rediscovered, which revealed an inscription naming the Rhodian artists, Athanadoros, Hagesandros, and Polydoros, who Pliny the Elder said had carved a statue of the Trojan priest Laokoon – assumed by most scholars to be the group found in Rome in 1506 and now in the Vatican Museums.

The Sperlonga Ulysses depicts the mythical Greek hero (from whom Tiberius claimed to be a descendent) at the moment of his blinding of Polyphemos. He is shown in frontal view, his face framed by a beard and his hair partially hidden by his cap or pilos, which in ancient Greece was worn by travelers. In both the marble and this present porphyry head, the furrowed brow shows intense concentration, the flying hair and open mouth illustrate his exertion and increase the drama of the moment. A closer look reveals that the two heads differ in the details of the hair, the beard, and the brows. The marble has more complex modeling and undercutting – reflecting the softer characteristics of the medium – as well as numerous losses, which are not reflected in the porphyry which, of course, is exceptionally hard and far less prone to chips and breakages.

The material used for the present head is porphyry, a rare, highly prized, and (as stated) exceptionally hard stone from Egypt. Red, green, and black porphyry was quarried from imperial land near Mons Porphyrites (the modern Gebel Dokham) in Egypt’s Eastern Desert. Because of its great prestige, rarity and association with imperial power, porphyry during the Roman Imperial period was probably under the control of the imperial families.

The use of porphyry in this portrait of the greatest of all Greek heroes, accentuates the dark aspects of his tale, and the anguish of Odysseus as he initiates the dramatic sequence of events that he has devised. The impact of this image is owed in large part to the extraordinary skill of the sculptor who carved this rare hardstone from Egypt.