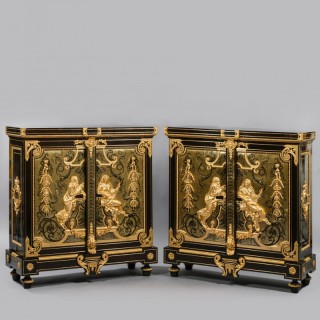 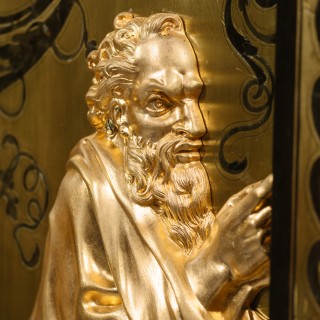 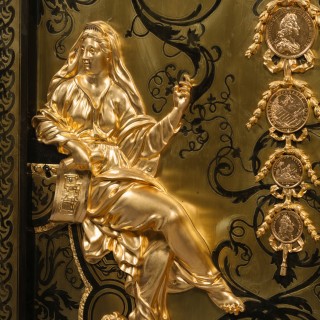 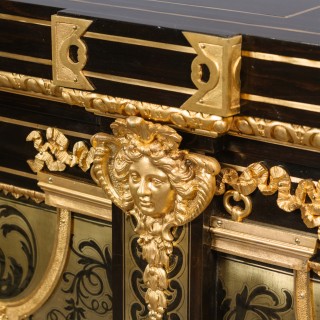 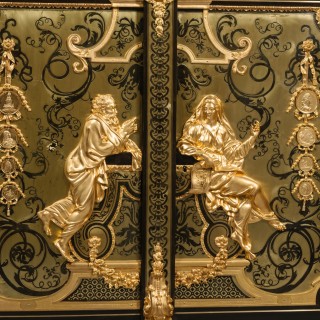 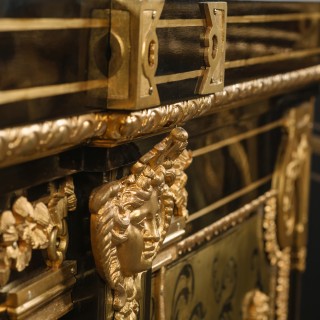 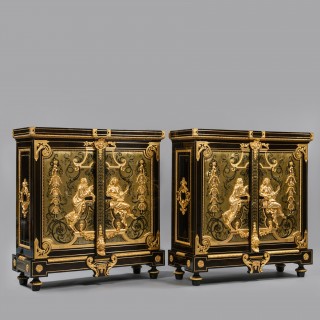 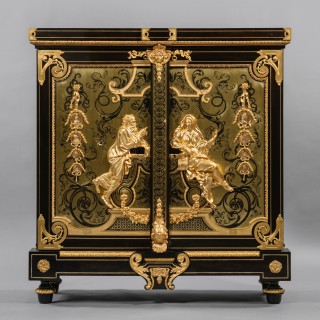 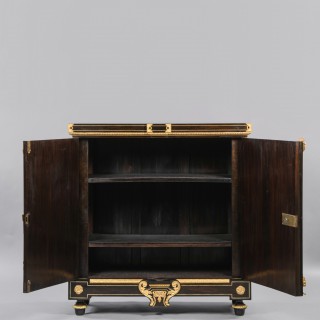 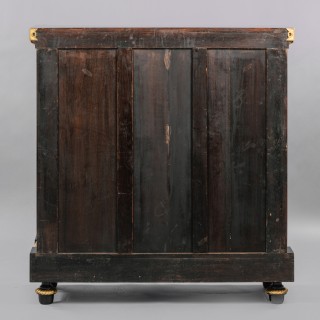 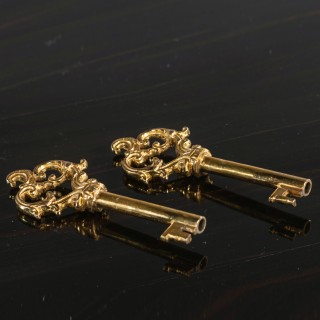 Stamped ‘Befort Jeune’ to the reverse of the gilt-bronze mounts.

This magnificent and very rare pair of Boulle marquetry inlaid and ebonised side cabinets or ‘basse de armoires’ are by the important 19th century maker Mathieu Befort, (Befort Jeune), after the famous model by André-Charles Boulle.

Each cabinet has an inlaid rectangular top with three lozenges above an egg-and-dart frieze and two panelled doors mounted with spectacular gilt-bronze figures of Aspasia and Socrates on a scrolling foliate ebonised ground. The figures are flanked by ribbon-tied medallions and centred by a projecting stile headed by a female mask mount and inlaid with vertical ‘C’-scrolls and husks, the sides embellished with a pierced scroll and foliate mount and each cabinet raised on a plinth base with patera to each corner and set on gilt-bronze headed ebonised toupie feet. The cabinets retain their finely cast original keys and each opens to an interior fitted with two shelves.

The design for this exceptional pair of cabinets is based on a celebrated series of low armoires created by André-Charles Boulle circa 1725, one of which is illustrated in A. Pradère, French Furniture Makers The Art of the Ébéniste from Louis XIV to the Revolution, London, 1989, p. 81, fig. 32. The figures of Socrates and Aspasia derive from Michel Corneille’s painting of 1673 on the ceiling of the Salon des Nobles at Versailles.

Celebrating the glory of Louis XIV, depicted in the medals suspended on the front of the cabinet, the model enjoyed a renewed appreciation in the 19th century, which led to the production of exhibition quality examples, amongst which is the present pair by Matthieu Befort,

Mathieu Befort, (Befort Jeune), (1813-1880) is recorded as having worked in Paris at 1 rue Neuve-Saint-Gilles from 1836 to 1866 and later moving to No.6, residing there until 1880. He descended from a family of renowned ébénistes and was the son of Jean-Baptiste Befort, called Befort Père. Father and son are noted for their interpretations of furniture by André Charles Boulle and the creation of vernis matin and porcelain mounted furniture often in the manner of Riesener. He was a brother of Bernard Befort, ebeniste-marqueteur and ‘antiquaire’ and like him, specialised in ‘Meubles de Boulle’. The firm received a medal at the 1844 Exposition de l’Industrie Française.

The firm of Befort specialised in “furniture in the style of Boulle and in the use of bronze and hardstone” (Ledoux-Lebard, Denise. Le mobilier français du XIXe siècle, (Paris), 1965; p. 29) and received a medal at the 1844 Exposition des produits de l’industrie française. Befort Jeune was recorded at Neuves-Saint-Gilles from 1844 until 1880.