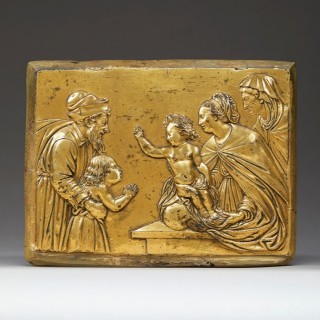 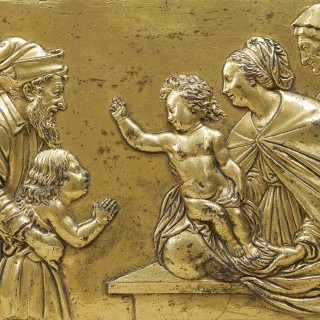 This outstandingly well-realised narrative plaque, showing Zachariah presenting the infant John the Baptist to the Christ-child, the Virgin and St Anne, was clearly designed to be framed for devotional purposes.

It can be attributed only on the basis of internal evidence, for – seemingly being unpublished – it brings with it no information from earlier scholarly opinion. However, an attentive examination, involving the comparison in style and physical type of all five diverse figures involved in the Sacred Drama independently of one another, leads ineluctably to the conclusion that it is almost certainly a masterwork by Barthélemy Prieur; surprisingly, it may indeed be the first narrative relief to be identified as by him (only two bronze heads in relief are recorded in his inventory of 1583).

Prieur was a French sculptor working in stone and marble who – especially towards the end of his life – specialized in casting bronze statuettes in commercial series. Characteristic of Prieur’s many statuettes and busts of young women – nearly always secular, indeed pagan, classical nymphs or goddesses – is the profile of the face such as is used here for the Virgin Mary: a high forehead sloping back in an almost Grecian continuous line from a small nose, with a receding hairline, while small pursed lips appear above a daintily receding chin. Several of his statuettes of nude women attending to their toilet, one of a maidservant on the way to market and another – probably a wet-nurse – seated to suckle a swaddled baby on her lap, are shown wearing a variety of pleated bonnets, not dissimilar from the more elaborate, perhaps more formal, mob-cap that the Virgin Mary wears here for this important occasion.

Meanwhile, the play of folds, with deep flutes seemingly gouged out of the broader planes of fabric and echoing one another in a profusion of nearly parallel lines, finds close analogies in the clothes of the kneeling Milkmaid with a cow. The divine child is a close cousin in appearance and his bouffant curls – if not in behaviour – of an all-too-human toddler in Prieur’s Mother and Child, who is being gently taught to urinate neatly by his kneeling, nude and attractive young mother; as well as his Running Boy or Cupid, shooting with a bow and arrow.

The elderly Zacharias, who leans forward from the left., with his eyes focussed on the Baby Jesus, but meanwhile restraining his son from advancing too eagerly, finds a resonance in a well-known genre-statuette by Prieur of a Vintner with basket, staff and a pruning-hook stuck behind his belt; while a companion of this statuette showing a Peasant-woman carrying a pot on her head (perhaps a fishwife?) provides in her rather severe, lined, face and hooded headgear a prototype for the ageing St Anne, who is shown backing up her daughter from the upper right corner.

These similarities in style, dress and physiognomy to other known works by the sculptor support the attribution to Prieur, which would make this beautiful relief a fascinating extension of his known oeuvre.

We are grateful to Dr Charles Avery for his expertise on the present relief, which is available on request.