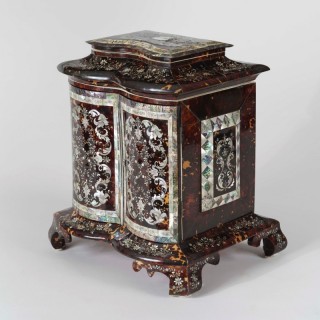 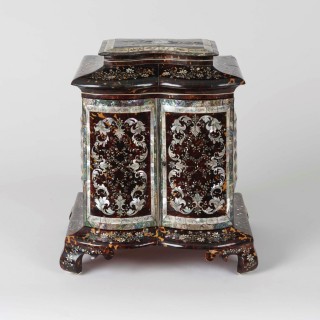 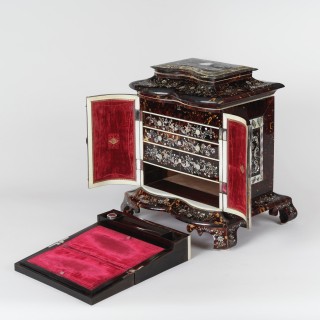 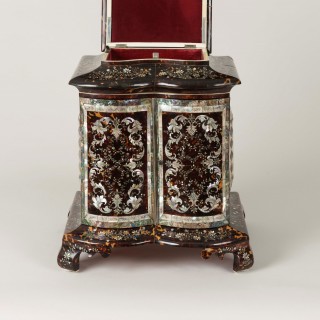 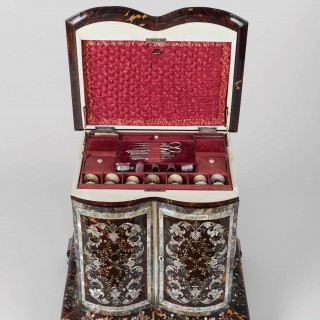 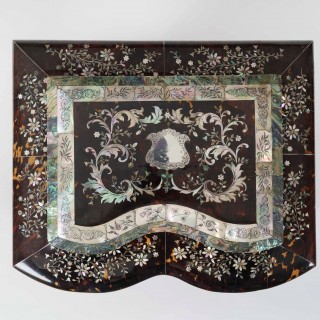 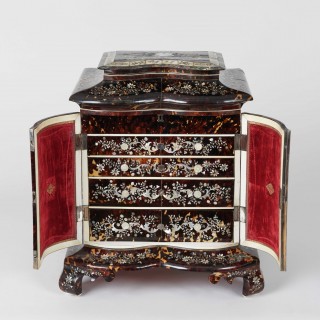 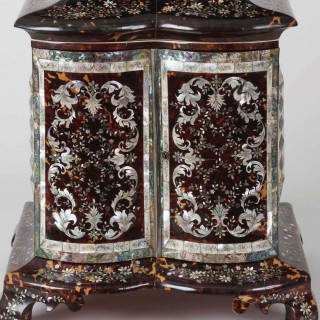 Richard Peters and Son exhibited a “tortoiseshell cabinet, inlaid with pearl; new pattern, with drawers, desk, and work-box complete.” It is therefore possible this magnificent table cabinet was made for—and shown at— the Great Exhibition of 1851.

This sumptuous table cabinet is an exceptional example of the production retailed by London luxury traders during the mid-19th century. It displays exquisite craftsmanship on a striking design showing off the qualities of the exotic materials used; tortoiseshell, ivory and mother-of-pearl. Only a handful of comparable cabinets are known to exist, one sold from the Bernheimer Collection, Munich with Lempertz, Cologne, 14th November 2003 (lot 725), one pair presented in Sotheby’s London, 6th November 1992 (lot 41), and another from the Duke of Norfolk’s collection, Sotheby’s London 8th July 2015 (lot 42). The MAAS Museum in Sydney has a cabinet of similar form in their permanent collection (A3241), which is dated to 1854.

Very few English makers would mark or label their pieces and even fewer left a reputation that could be associated with the quality of this table cabinet. Father and son Thomas and William Lund of Cornhill, London, from a firm established in 1804, were producing writing boxes, tea caddies and dressing cases in similar fashion to this casket. This firm’s boxes were meticulously finished, with fine silver and metal partitions for the tortoiseshell veneers and always with ivory veneered edges and faces, as seen here, and should not be excluded as potential makers or retailers of this casket.

A considerable production of mother-of-pearl and tortoiseshell objects was coming from Birmingham and three manufacturers from this city exhibited and advertised this type of work at the Great Exhibition of 1851: Richard Peters and Son, H. Chatwin and John Hayden. It is not unlikely therefore that Birmingham manufacturers were supplying London retailers.