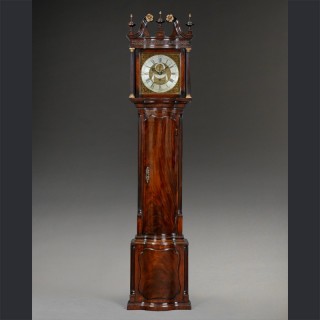 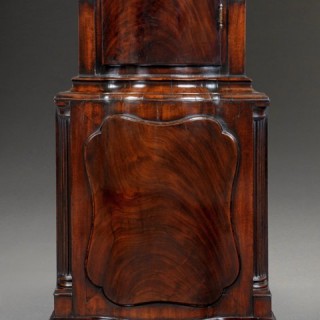 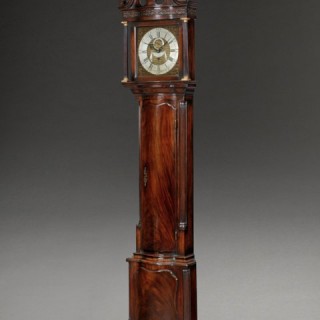 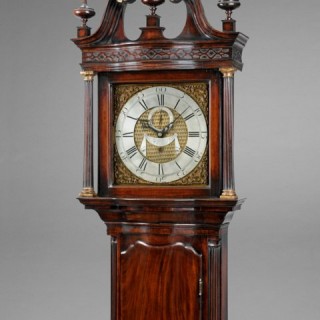 The composition of the brass and steel used to make the eight day movement is of the highest quality and in some way must have contributed to the astonishingly original condition of the movement. The substantial plates are shuttered and the bevelled cocks, together with a number of other features, are indicative of George Graham.

The deadbeat escapement and the bolt and shutter maintaining power, along with the substantial pendulum which is suspended from an iron bracket fixed to the seat board, contribute to the precise timekeeping.

The 12 inch (30 cm) square brass dial, with silvered chapter ring and rococo spandrels, is signed on a bold silvered lambrequin applied to the hatched dial centre. Remarkably, the movement is also signed and dated.

The Chippendale influenced bow fronted case has also been constructed with the finest materials available. The richly figured veneers have the most wonderful colour and a deep patina.

Lewis Thomas is recorded by Baillie as working in London for George Graham. Most probably this was during the second quarter of the eighteenth century. It is believed that Thomas moved to Chester following Graham’s death and on his own death he bequeathed his business to his son, James. On 23rd September 1777, James placed an advertisement in the Adam’s Weekly Courant stating that he (James) had “acquired Mr. Graham’s Method of Clock making under his Father, Lewis Thomas, who wrought for that Gentleman (Graham) nine Years”.