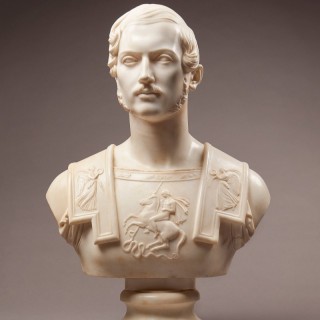 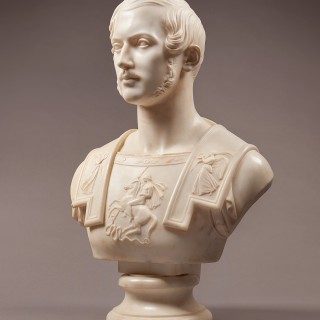 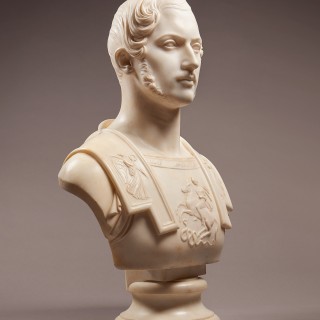 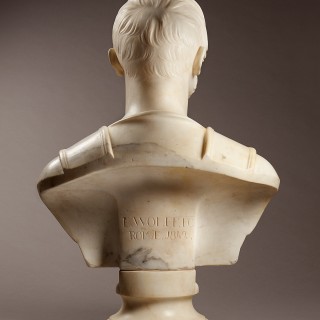 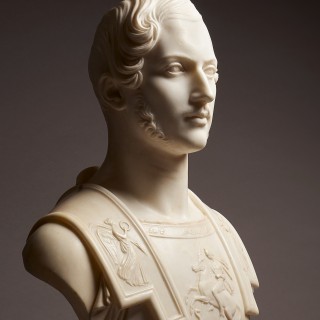 This portrait bust of Prince Albert was carved in Rome by the German Neoclassical sculptor, Emil Wolff. It depicts the handsome young Prince in heroic fashion, wearing antique-style armour adorned with the symbols of Victory and St. George.

It is one of only three known busts of this model, all of which were probably direct commissions from Prince Albert, based on a life model completed by Wolff at Windsor Castle in the summer of 1841. The other two busts, one of which is in the Royal Collection, the other formerly being with the Royal Patriotic Fund, are both based on the same model as the present version, with the only minor compositional difference being the rendering of the pattern in the uppermost border of Albert’s breastplate. Wolff also carved two earlier, less elaborate busts of Albert, one of which now resides in the Royal Collection (1839: Kensington Palace), the other being in the Louvre (c.1839), both of which were carved in Rome when Albert was a young bachelor on his Grand Tour of Italy. This repeated patronage suggests that Wolff, a fellow German, had become Albert’s preferred portrait sculptor.

Following the present bust, Wolff also executed two large marble statues of the Prince Consort in 1844 and 1846, based on the same 1841 model. As Queen Victoria herself stated, she regarded this second, more ornate Neoclassical composition as “an improvement” on the plainer bust of 1839. Indeed, the repeated re-use of the 1841 model for Royal commissions suggests that the Queen was much enamoured with this heroic image of the Prince Consort.

Prince Albert was born in Saxony in 1819 and married Queen Victoria in February of 1840. The present portrait of the Prince was modelled in 1841, only a year after he became the Consort and shortly after the Regency Act of 1840 was passed, which designated Albert as Regent in the case of Victoria’s early death.

That this bust was intended to convey Albert’s newly-instituted and important ceremonial role in British politics is apparent in the attributes carved in relief on his cuirass. The two winged Victories from Graeco-Roman mythology on the shoulder plates, both holding palm leaves and the wreath of glory in each of their hands, suggest Albert’s requisite classical erudition and recall depictions of emperors from Imperial Rome. The carving of St George Slaying the Dragon on the centre of the breastplate, meanwhile, attests to Albert’s Christian faith and, in its depiction of England’s patron saint, shows his allegiance to the British Crown.

Emil Wolff was the most important German sculptor working in Rome in the first half of the nineteenth century. Following his training in Berlin at the Kunstakademie, where he won several prizes, Wolff moved to Rome in 1822 as a young man and remained in the Eternal City until his death in 1879. In Rome, Wolff was immediately accepted as an assistant in the studio of that other famous Neoclassical sculptor, Bertel Thorvaldsen (1770-1844). Wolff soon began modelling his own works based on mythological themes, which formed the bulk of his output in the 1830s and 1840s, his most prolific period. He also produced a number of portraits both of living sitters as well as historical figures, the latter of which were made for the German Archaeological Institute in Rome. Along with Prince Albert, Wolff’s patrons included the King and Crown Prince of Prussia, as well a Russian and English clients. As a result, today his works reside in some of the most important museums and collections in Europe and Russia.