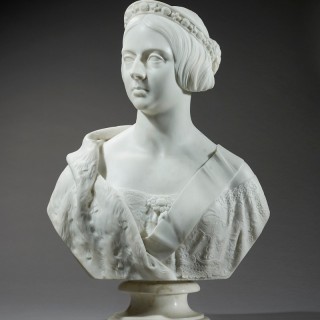 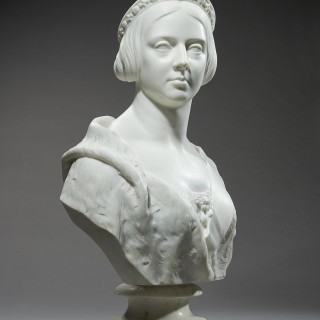 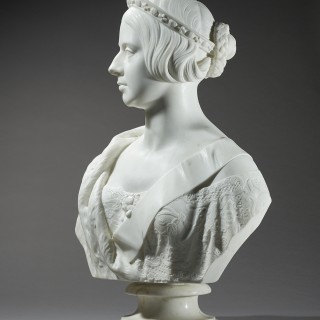 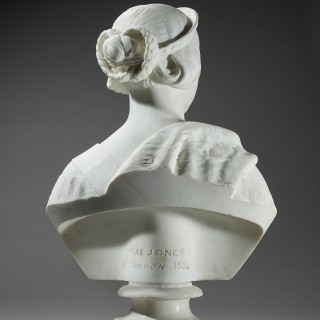 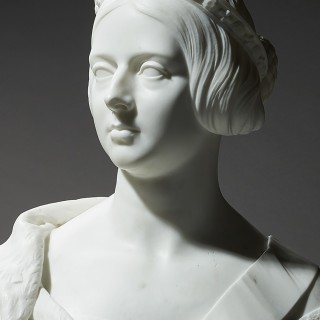 In terms of composition, it recalls Sir Francis Chantrey’s famous portrait of the young Victoria, which depicts the Queen in similar posture and clothing, also wearing a tiara and facing to dexter. Jones’s later portrait, however, presents a slightly more mature Victoria than Chantrey’s. Furthermore, in the present bust the attention-to-detail evident in the carving of the fur of the Queen’s ermine shawl and the foliate patterns on her undergarment, as well as the jewels embellishing her tiara, convey a greater concern for decoration and pomp compared to Chantrey’s more restrained Neoclassical style.

The present work is almost certainly the version in marble made for the Queen and exhibited at the Royal Hibernian Academy in Dublin in 1854, as cited by Roscoe (op. cit.). It was shown alongside two other marble busts by Jones, one of her husband, Prince Albert (present location unknown) and another of William Dargan, an important Irish engineer and founder of the Royal Dublin Society.

All three busts of Victoria, Albert and Dargan were carved by Jones in 1854 and were therefore probably part of the same commission received from the Queen. The three busts were in 1854 gifted by Victoria to Dargan, who had organised the Great Dublin Exhibition in May 1853, which the Queen had attended. Indeed, Dargan was personally visited by Victoria and Albert later that year, when the Queen offered him a baronetcy, which he declined. The model for this bust must have resulted from sittings with the Queen (probably at Windsor) in late 1853 or early 1854; the plaster model was exhibited at the Royal Academy in London in 1854.

The sculptor, John Edward Jones, was born in Dublin in 1806 and trained as a civil engineer in Ireland, before moving to London. By 1840 he had abandoned engineering for sculpture, which he soon excelled at, exhibiting annually in London at the Royal Academy between 1842-62 and in Ireland at the Royal Hibernian Academy from 1847-54. Although he carved a number of statues and one public monument, his main concern was portrait busts, of which Roscoe records some 136 works in a relatively short career of just over twenty years.

The present rare and early portrait of Queen Victoria is one of the most important works by this gifted Anglo-Irish sculptor.

PROVENANCE:
Almost certainly the bust commissioned by Queen Victoria and gifted by her in 1854 to William Dargan, Dublin;
With Christopher Wood, London, 1988;
Private collection, UK