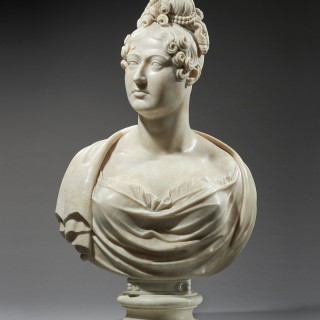 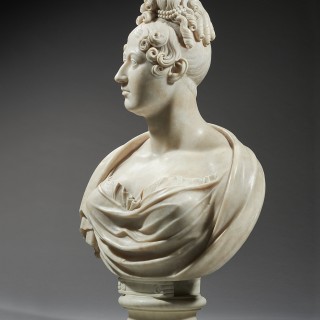 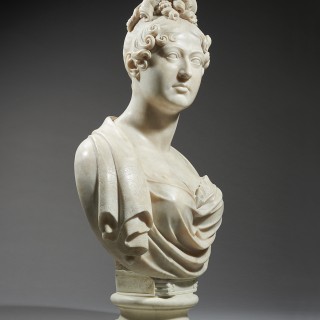 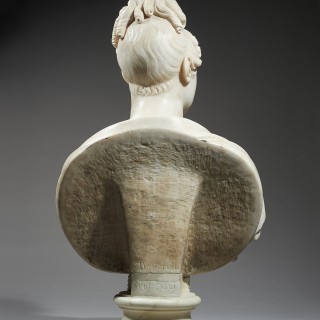 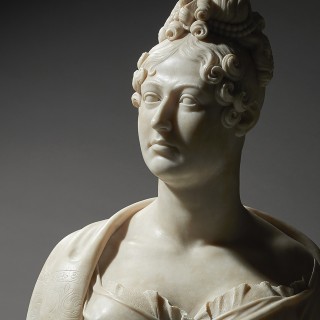 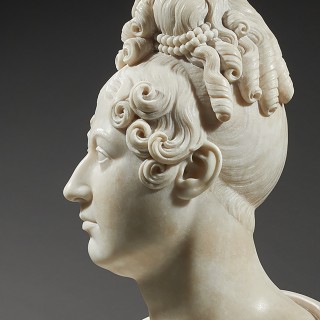 This fine and apparently unique marble portrait of Queen Caroline was carved by Peter Turnerelli, one of the most prolific British portrait sculptors of the nineteenth century and Sculptor-in-Ordinary to the Royal family.

Turnerelli was born in Belfast in 1774 to a mixed Irish-Italian family. His family moved to Dublin when he was a young boy, then to London in 1793 following the death of his mother. In London he joined the Royal Academy Schools in 1794 and in 1799 was awarded a Silver Medal by the Academy for one of his models. Whilst at the Royal Academy Schools he worked in the studio of P.F. Chenu of Wardour Street, Soho. Turnerelli completed his studies soon after 1799 and is said to have spent a brief period in Rome, but by 1802 he was back in London and living in Poland Street, Soho, where he soon came to the attention of other notable artists of the period, including Sir Thomas Lawrence, who recommended him to the Royal household to teach modelling to the young Princess Charlotte. His first Royal commission followed in 1802 for a portrait of the Princess. He held this post for three years, after which he was promoted to Sculptor-in-Ordinary to the Royal Family. His busts for the Royal family included the 1809 ‘Jubilee bust’ of George III, of which over eighty copies in marble were ordered.

The sitter, identified as Queen Caroline, was Consort of King George IV and daughter of the Duke of Brunswick-Lüneburg. She married George IV (at that time the Prince of Wales) in 1795, but after the birth in 1796 of their only child, Princess Charlotte, the couple separated. During the Prince’s regency of 1811-20 for his insane father, George III, Caroline lived mainly in Italy.

After his accession to the throne in 1820, the new King urged Caroline to remain on the Continent, but she refused and returned to England in June of that year. Caroline, through her support for political reform, had become a popular figure for the growing Radical movement in England. The public thought of her as a ‘wronged woman’ and riots broke out in support of her upon her return to England. As a result, George IV urged Parliament to introduce the Pains and Penalties Bill in July 1820, which would dissolve their marriage and deprive Caroline of the title of Queen Consort.

The debate for the Bill effectively became a public trial for Caroline, with accusations that during her time in Italy she had slept with a male friend of hers called Bartolomeo Pergami. After passing the House of Lords, however, the Bill was considered too unpopular to go through the Commons, so was eventually abandoned and Caroline remained Consort. Despite this, Caroline was not invited to George IV’s coronation on 19th July, 1821 and upon trying to enter Westminster Abbey, she was subsequently locked out of the ceremony by the guards. The stress she likely suffered from this rejection led to her becoming unwell, and she died only three weeks later, on the 7th August, 1821.

The present bust of Queen Caroline was carved in 1821, perhaps to celebrate Caroline’s return to England that year and her new position as Queen Consort of England. This, along with the fact that Turnerelli had a close relationship with Caroline and the Royal family, indicates that the present bust was in all likelihood a commission from Caroline herself. The elaborate carving of the curls of her hair, the uncut eyes and the attic-ionic carved plate above the socle typify the Neoclassical style of the late 18th and first half of the 19th century, made famous across Europe by Antonio Canova’s high-quality productions in Rome.

When visiting England, in fact, Canova praised Turnerelli’s bust of Henry Grattan as the best modern bust he had seen in England. This suggests that the two may have been acquainted from Turnerelli’s time in Rome, where the young Irishman could have spent some time working in Canova’s studio. Indeed, the fine finishing and attention-to-detail evident in the carving of the curls and loops of hair, as well as the idealised, Grecian facial features, are all influenced by Canova’s work, indicating the pedigree of this fine Neoclassical bust of one of the most popular and controversial Queens of England.

PROVENANCE:
Presumed to be a commission from Queen Caroline, circa 1820-21;
Private collection, England