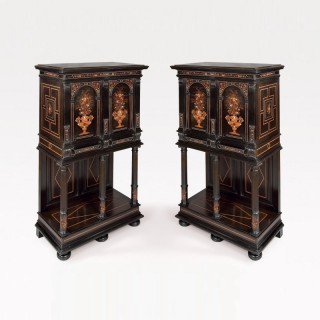 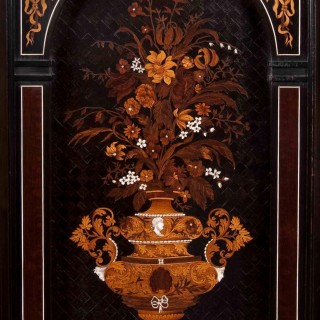 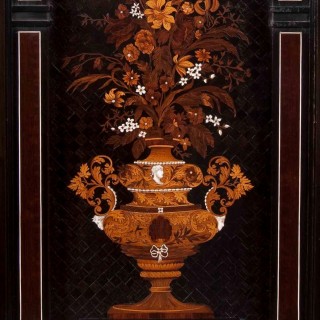 An Important Pair of Ebony, Ivory Inlaid and Marquetry Cabinets in the Louis XIII Manner Attributable to Charles Hunsinger

Rising from flattened bun feet, the lower platform inlaid with a lozenge, two columns support the cabinet, which is of two door form, with a shelved interior, which are inlaid with well executed floral marquetry panels, in precious woods and ivory. The top having a conforming inlaid lozenge.
Paris, Circa 1870.

Charles Hunsinger (1823-1893) was first recorded as a cabinetmaker specialising in ‘meuble de luxe et de fantaisie’ in the Paris Almanac of 1859. Later he worked from 244 Rue Fabourg –Sainte-Antoine, settling in the Rue Des Pyramides in 1874, by which time he had acquired a partner, Charles-Adolphe-Frederic Wagner. The company participated in the Paris Exhibitions of 1865, 1867, 1878 and 1879. In the Brussels Exhibition of 1881 he was awarded the Gold Medal for excellence of craftsmanship. His work is shown in the Musee D’Orsay, and the Vienna Art Museum. He is recorded in Denise Ledoux-Lebard’s monumental ‘Le Mobilier Francais du X1Xe Siecle, published by Les Editions de L’Amateur, 1984, revised and expanded 1989, which shows pieces of comparable form and type as ours.

An Important Pair of Ebony, Ivory Inlaid and Marquetry Cabinets in the Louis XIII Manner Attributable to Charles Hunsinger