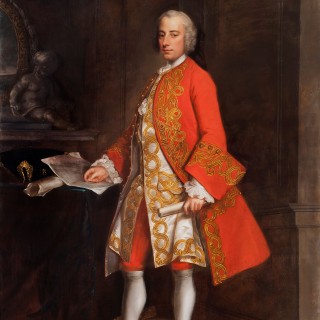 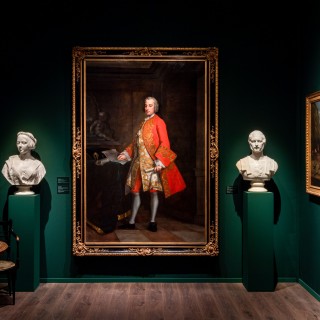 This portrait, showing the sitter standing full-length in an elegant room, has important provenance, coming from the collection of the Church Commissioners at Lambeth Palace. It may be identified in a Palace inventory of 1917, so is likely to have hung there since the late nineteenth century or earlier. It is an impressive example of eighteenth-century full-length portraits of “men of the day”.

The sitter is the Hon. Augustus Townshend, second son of Charles, 2nd Viscount Townshend and his second wife, Dorothy, daughter of Robert Walpole of Houghton, Norfolk, and sister of Sir Robert Walpole, 1st Earl of Oxford. Augustus Townshend was a merchant adventurer and Captain with the East India Company. It is recorded that in 1745 Townshend commanded the ship Augusta on its voyage to the East Indies. At some point during the voyage Townshend fell in and subsequently died in 1746 at Batavia, at a tragically young age.

PROVENANCE:
Collection of the Church Commissioners at Lambeth Palace