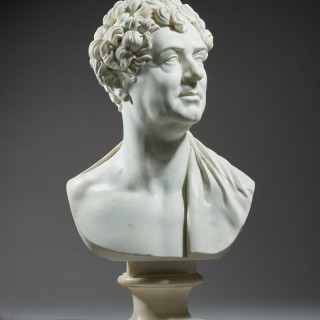 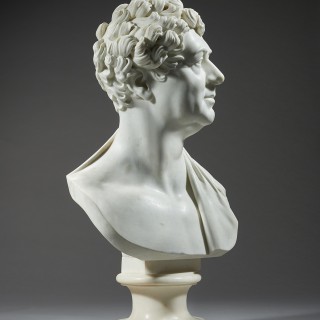 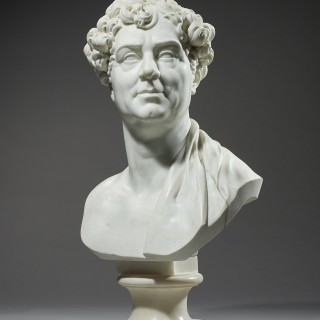 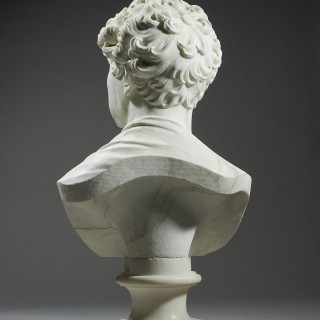 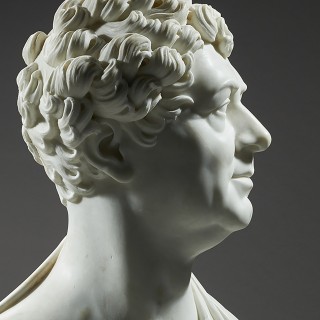 An Impressive and Rare Portrait Bust of George IV

This striking bust of King George IV is closely related to an official portrait of the King by Sir Francis Chantrey from the early 1820’s, when the sculptor’s reputation was at its zenith.

Like the official (and more ubiquitous) fully draped version, the prime version of which resides in the Devonshire Collection (Chatsworth, UK), the present bust portrays the King in an heroic manner, his head turned to sinister, a partly bared chest, long manly neck and hair carved intricately in luxurious curls. Both versions are reminiscent of Sir Thomas Lawrence’s painted portrait of King George IV from the same period, where the King is styled as a confident patrician ruler, with a haughtily turned gaze and flowing curls of hair.

The present composition, of which no other copies are known, is a more informal portrayal of the King than the official version, with the classical drapery reduced to a small garment on the left shoulder. This rendering of the drapery is a common feature in several other busts by Chantrey, such as his portrait of Samuel Shore. Furthermore, the facial features of the King in the present bust are modelled in a more realistic manner compared to the rather more idealised official portrait. These details are visible in Chantrey’s original studies of the King from 1821, where the nose, jowls and shadows under the eyes are more pronounced, as in the present composition.

The overall similarities in the rendering of the hair, facial features and expression, however – as well as the quality of the carving itself, evident in the abundant all’ antica curls and drill-work – are all indicative of Chantrey’s authorship.

PROVENANCE:
Possibly one of the unsigned and undated busts made for the King in 1822;
Collection of Ian Dawson Grant (1925-1998), first Secretary of the Victorian Society;
Bequeathed by the above to a private collection, UK

An Impressive and Rare Portrait Bust of George IV