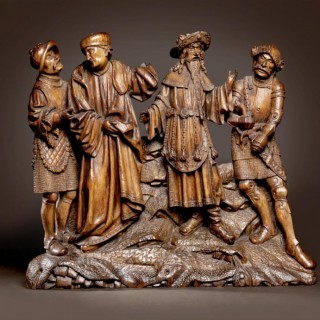 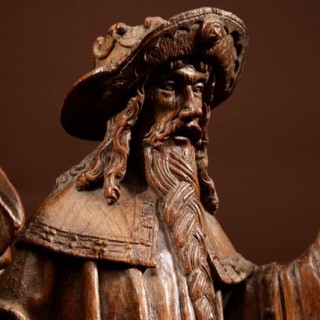 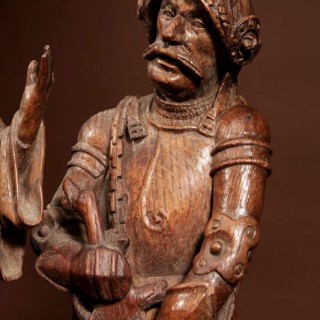 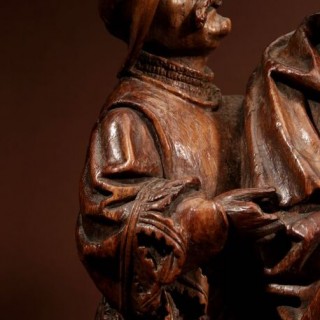 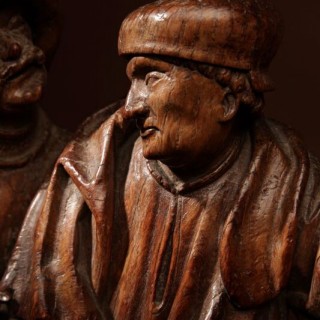 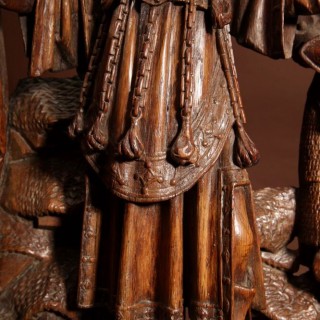 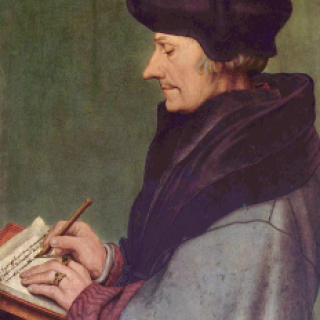 Jan Borman II
​An original signed JAN BORMAN II ( JAN BORMAN de jongere ) oak sculpture with its history and newly discovered facts, with the great possibility that this sculpture was once part of the missing second altar which Jan Borman II has made for the Chapel of the Holy Arnold in the St. Pieters Church in Leuven and where from till now on no other parts are known and with the great possibility that one of the figures is Desiderius Erasmus who was admired in the town of Leuven in the period that this altar was made. The order to make the second altar came from the St. Arnoldes brotherhood and of the brewers of Leuven.
Circa: 1490-1510
high: 57 cm wide: 65 cm deep: 13 cm

​The St. Joris altar is signed in fragments, one part only: JAN (on a sword)
and the date is carved on the belt.
Very striking is that the signature on our sculpture is also in fragments and carved on the belt as well:
” IH MAN I “
which stands for: JOHANNES (JAN) (BOR) MAN de jongere = JAN BORMAN II
This was also concluded by a well known Dutch curator, who gave us the explanation of the signature.
Many more details are also similar for example: the stones on the surface of the substrate, partly covered with grass and you’ll find this also by the St. Joris altar and in particularly the character heads clearly come from the same master hand and striking is that the eyes, the eye lids and the faces are carved on the same way and by the same hand.
Technical both altars were built up in the substrate from small blocks of oak.
By our sculpture the robe of Emperor Diocletianus is carved in the same way as the robe of Diocletianus of the St. Joris altar and also one knee with a boot is clearly visible and carved in the same way by both figures.
Striking is also that the rim of the robe exactly has the same ornament by both figures.
Also both hats are the same with on the hats a crown.
Over the last thirty five years we have also discovered that there is a great possibility that the second figure on the left could be: Desiderius Erasmus.
It is known that Desiderius Erasmus was already in 1502 very famous and respected in Leuven and the University offered him an appointment, but he refused.
It is also known that he lived in 1504 in Leuven and that he was for a very long period the guest of Jean Desmarais, Professor in the Rhetoric and Canon of the St. Pieters Church in Leuven and it is of course a co-incidence that Jan Borman II has made the second altar for this church in 1506/7, so it could very well be that there were contacts between Jan Borman II, Jean Desmarais and Desiderius Erasmus and because Erasmus was well respected in Leuven there is a possibility that Jan Borman also has used Erasmus out of respect as a figurant in this altar as one of the circa sixty other figures which are usually used to complete an altar decoration.
It is also known that Erasmus has lived in Anderlecht. ( Bruxelles ) where Jan Borman II lived as well.
That we think about Desiderius Erasmus is based on all this information and on his charismatic face, the long strait nose, the hollow cheeks with the S shaped line beside the nose going down to his lips and his protruding chin, all characteristic features.
That the figure of Erasmus on our sculpture has been carved in profile might come from an engraving of Erasmus, which was used as an example, because it is was known that Erasmus promoted himself with prints of engraved self-portraits.
This together with the clothes and the profile of the face completes the Erasmus characteristic look. 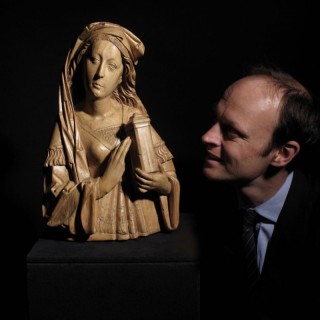