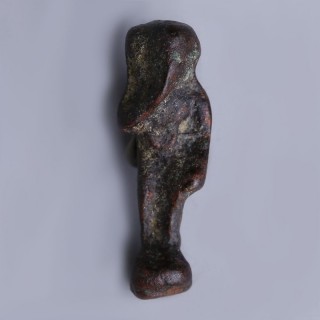 A rare Egyptian cast bronze pendant of the god Harpocrates, the personification of Horus the Child, identifiable from his side-lock, which was a common hairstyle for young Egyptian boys, and the gesture of holding his index finger to his chin. The deity is depicted standing over a small plinth, with one arm along his side and knees slightly bent. The reverse features a loop for suspension. The pendant would have been worn as an amulet, bestowing its protective powers upon the wearer.

Extremely fine, complete and intact. The amulet is suitable for modern wear with care.