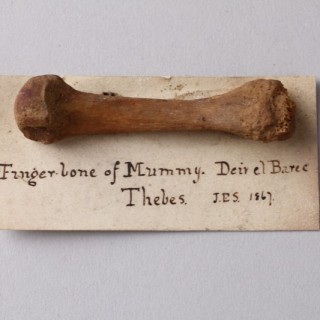 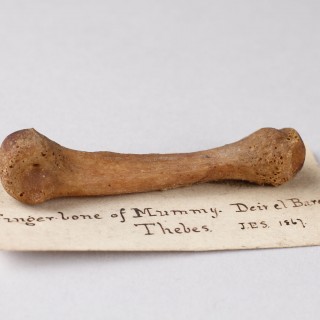 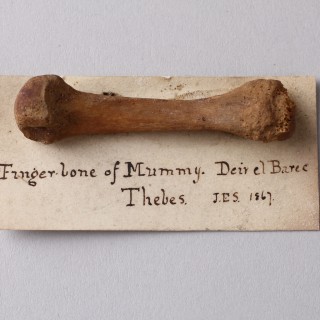 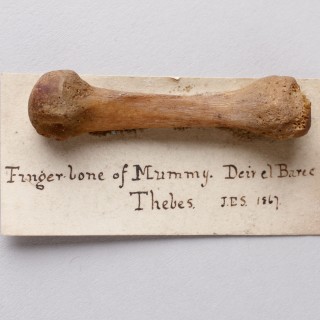 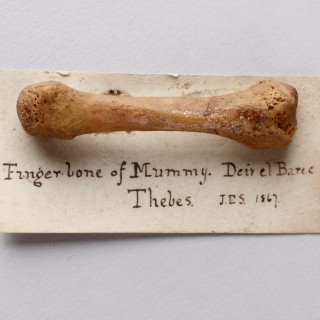 An Ancient Egyptian Finger Bone of a Mummy attached to a Card Mount Inscribed ‘Fingerbone of a Mummy Deir El Bahri Thebes J.E.S. 1867’
New Kingdom 1550 – 1069 BC

Ex collection of James Ewing Somerville (1843 – 1923) who visited Egypt and Palestine in 1866 having gained an M.A. in 1862 from Glasgow University
Thence by descent

Deir el-Bahri or Bahari was an important Theban religious and funerary site on the west bank of the Nile opposite Luxor comprising temples and tombs dating from the early Middle Kingdom to the Ptolemaic period. The most important part of the site consists of a deep bay in the cliffs containing the remains of temples of Medtuhotep II (2055 – 2004 BC), Hatshepsut (1473 – 1458 BC) and Thutmose III (1479 – 1425 BC) as well as private tombs contemporary with each of these pharaohs.