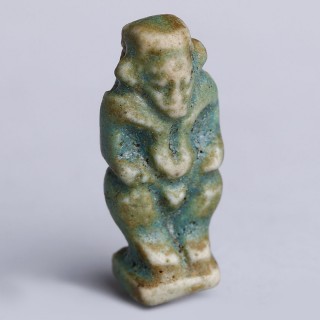 An Ancient Egyptian double-sided turquoise faience amulet of the dwarf-god Ptaichos, portrayed nude and squatting with his hand clasped on his protruding stomach. His legs are bent out to the sides and his head is disproportionally large. His facial features are also unusually large and exaggerated. The Ancient Egyptians wore amulets alongside other pieces of jewellery. Amulets were decorative, but also served a practical purpose, being considered to bestow power and protection upon the wearer. Many amulets have been found inside the wrappings of mummies, as they were used to prepare the deceased for the afterlife.