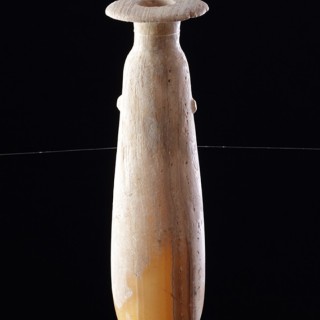 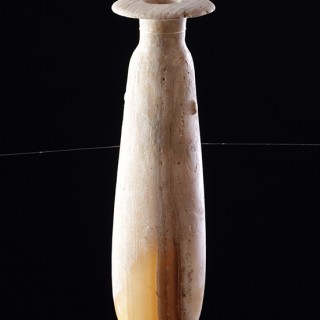 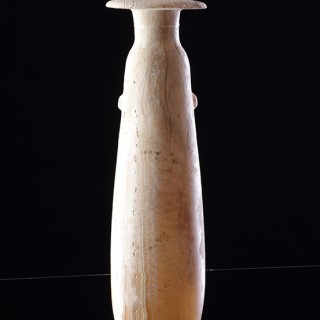 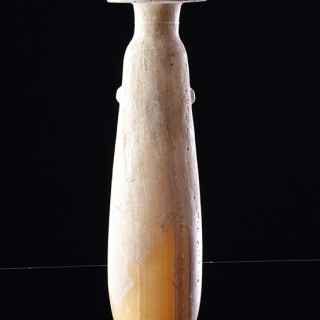 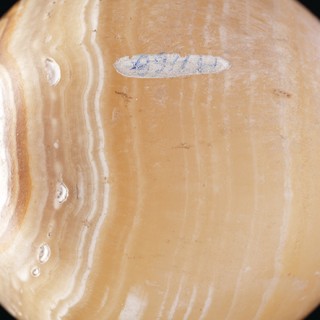 An Ancient Greek Alabastron Carved of Egyptian Alabaster with a Wide Disc Rim and Small Lug Handles
The base marked with collection no. A7/68
Some restoration to neck and upper body
Circa 6th Century BC

Provenance:
Ex collection Nikos Paschalis (1918 – 1948) Grandson of George Paschalis founder of The Paschalion Archaeophylakeion Museum in Samos Greece 1912
Nikos Paschalis was stationed in Alexandria whilst with the British Army during the 2nd World War
Thence by descent to his sister Assimina Paschalis living in Melbourne Australia by 1965
Thence by Descent

These vessels were named for the material from which they were most usually made and were used for perfumed oils and fragrant ointments. Both the alabastron and the lekythos had narrow necks so that the precious liquid ran out in drops. Perfumed oil was extensively used in ancient times to anoint the body after a bath and in the Palaestra. The best oil came from olives, and the best was produced in Attica where the olive tree was considered a gift of the goddess Athene who by means of it had obtained victory in her contest with Poseidon for the possession of the country. The olive groves were under the special protection of the State and it was forbidden on pain of death to cut them down as they were regarded as the property of the goddess. Part of the oil obtained was sold by the farmer to the state at a fixed price and this oil was only used for festive purposes, especially for distribution in prizes to the victors in the Panathenaic contests.
The manufacture of fragrant oils and ointments was an important industry in ancient Greece. A large number of preparations were used for embrocations of the body, pomades for the hair and beard, for perfuming clothing, and for adding to bathwater. The most expensive kinds of fragrance were brought from the East, such as the much prized ‘Nardinum’ pressed from the flowers of the Indian and Arabian grass ‘Nardus’. For preserving these luxurious oils vessels of stone, and especially of alabaster, were preferred.