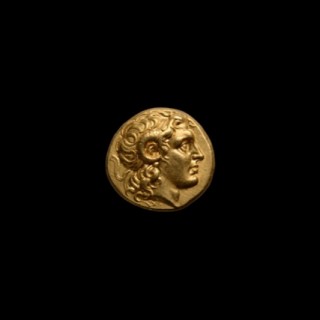 One of the most beautiful portraits of Alexander the Great, in gold, known.

This stunning gold stater minted under King Lysimachos depicts one of the earliest known portraits of Alexander the Great, in superb Hellenistic style, dating to 297 – 281 BC.

The obverse shows the now deified King, Alexander the Great. He is shown facing right, his wild, unruly hair held down by a thin diadem, the horn of Ammon curling over his ear, clearly identifying him as Alexander.

The reverse with the goddess Athena enthroned left, holding Nike in her extended right hand, resting left elbow on shield with aegis. The legend reading:

Mint mark monogram below Athena’s hand and under throne.

In antiquity, these coins were intended to exhibit Lysimachos’ connection to Alexander and thus, his legitimacy to rule. Today though, the surviving examples are admired and collected as beautiful artworks depicting one of history’s greatest men.

This is an outstanding example of this hugely desirable type, arguably preserving the most artistically accomplished image of Alexander known from these coins, an apparently unrecorded reverse variety but from the same obverse die as the famous Nelson Bunker Hunt example. 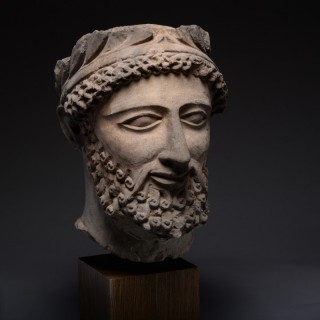