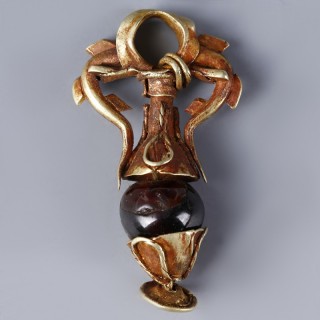 An extremely fine example of Greek Hellenistic goldsmith art, a beautiful high karat gold pendant, composed of a single red garnet large spherical bead, held in place by two conical-shaped gold beads, one at the top and base of the garnet bead. The pendant is further enriched by two dolphins, modelled in a thin sheet if gold, one at each side of the suspension loop. Such pendant has been adapted from an earring in ancient times, with the suspension loop modelled from ancient gold.

Date: Circa 2nd-1st Century BC