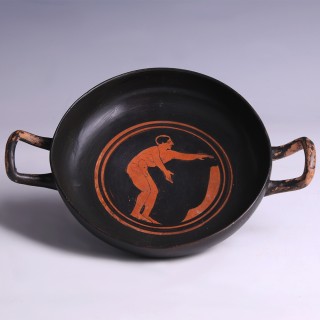 An excellent ancient Greek, Attic, red-figure stemless kylix with a male nude scene. The drinking bowl has a convex body, forming a shallow bowl, that is covered in a rich, dark glossy glaze. There are two D-shaped handles to each side, are which have become worn slightly with age. Within the shallow bowl is a simple decorative scene, situated at the base. It depicts a naked male youth who is crouched over reaching outwards, towards a segment of an altar, seen on the right. Attention has been paid to his muscular physique, with his stomach and chest detailed with slight engravings. The scene is framed by two concentric circles, coloured a rich terracotta red from the original clay. The rest of the bowl is painted in a black glossy pigment. The bowl itself rests on a small foot ring base. To the centre of the ring base are a series of concentric circular patterns, with a central eye at the centre.

Length given below measures from handle edge to handle edge. The internal width of the bowl is 14.1cm.

Date: Circa 5th Century BC

Excellent condition. Some loss of glaze to the handles. Repaired professionally to the body.