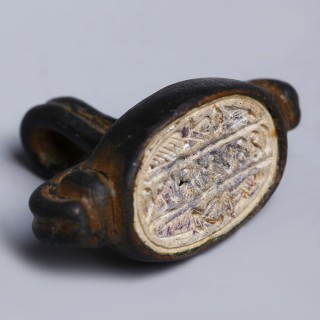 A finely modelled Ancient Phoenician cast bronze pendant, holding a steatite scarab. The thick bronze wire forms a suspension loop at the top and is modelled around the scarab, framing it. The scarab features a variation of an “anra” column, flanked by two crowned Uraei and Horus falcons. Anra scarabs are identified by a sequence of hieroglyphs which always includes the letters n and r in the inscription. This type of pendant is Phoenician in origin and was widely distributed throughout the Ancient Mediterranean world.