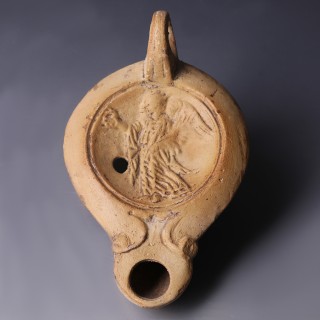 A decorated Ancient Roman oil lamp, featuring a volute angular-tipped nozzle. The shoulders, smooth and undecorated, slightly raise up to form a circular ridge which slopes into a sunken discus depicting a winged Victory. The deity is depicted elegantly draped in a long robe, facing right and holding a wreath in her right hand. The lamp features a large ring handle with two grooves and there is one hole, left of the figure, which would have been used to fill the lamp with oil. The base ring is marked with two circular grooves and the lamp maker’s signature: GABINIA.

This oil lamp falls under the Loeschcke V category, formed of examples with simpler volutes. The decoration becomes more simplified, with a single groove for the volutes.

From a specialist collection of Roman oil lamps formed by Robertson Brockie (deceased), all acquired before 2008 from a central London ADA gallery; Southport Lancashire.